By Emperor on September 4, 2009 in Loon Blogs, Loon-at-large 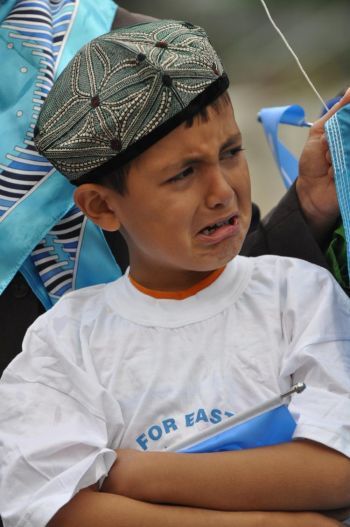 Uighur Boy Cries at a Protest Against Repressive Communist Policies

The indefatigable “anti-Islam blogger” Robert Spencer is at it again, if you thought he couldn’t get any lower or slimier think again! In another example of his “objective” and “unbiased” reporting and commentary on  Muslims, Spencer posts a blog titled Uighur Muslims in China Stabbing Opponents with Tainted Needles.

Uighurs are a Central Asian Turkic people (Turks you may recall are not really Robert Spencer’s favorite people).  The Uighurs are one of the minorities like the Tibetans that have suffered the most under the repressive policies of the Communist Chinese government. It is quite strange to see Spencer, a self-proclaimed “defender of Western values” find himself on the side of Communist China, but for Spencer every alliance is okay as long as it is against Muslims and “the Jihad” as defined by him.

This time Spencer reverts back to his favorite tactic of projection in which he takes an event and superimposes his own feelings and attitudes towards Islam and Muslims onto it, though it might be totally unrelated.

He writes of a “new never-before-seen” form of Jihad he has termed “syringe Jihad,”

Syringe Jihad in China. “China: Demonstrators demand security after needle attacks,” from CNN, September 3 (thanks to all who sent this in):

BEIJING, China (CNN) — Thousands of Chinese demonstrators crowded the streets of Urumqi in western China on Thursday to protest what they say is a lack of police protection, witnesses said.Over the past month, more than 400 ethnic majority Han Chinese have been stabbed with tainted syringes by Uyghurs, the Muslim minority, according to local news reports. The stabbings fueled Thursday’s protests by Han Chinese in the capital of China’s Xinjiang Uyghur Autonomous Region.

Many of those attacked with the hypodermic needles were hospitalized, but there have been no reports of deaths, the reports said.

Fifteen suspects have been detained for allegedly carrying out the stabbings, a senior official said Wednesday, according to China’s state-run Xinhua news agency. Of the 15, four have been formally charged, Xinhua reported.

A source told CNN that “countless” police and soldiers have deployed to Urumqi and so far, the demonstrations have been peaceful.

A local woman told CNN that the stabbings were ethnically motivated and that government text messages to citizens have warned that the syringes contained an unknown disease…. 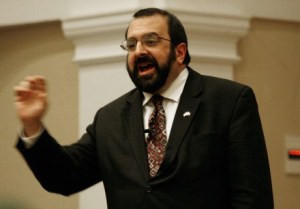 Robert Spencer sees these deplorable stabbings, presumably done by Uighurs, not as an instance of ethnic unrest but as something more insidious (i.e Jihad) . He does not attribute it to the tensions that exist in Xinjiang between Han Chinese and Uighurs, a tension that has increased over the years because “Beijing offered financial incentives for ethnic Chinese migrants to come to the province and set up businesses. Now, ethnic Han Chinese dominate nearly all big businesses in the region.”

All analysts are unanimous that the unrest and animosity between the two ethnicity’s is unrelated to religion, but in contradiction to all the analysis and reports available Spencer makes the claim that the violence has “nothing to do with the tensions between the two ethnicity’s.” Instead, he implies this is an offensive by Uighur Muslims propelled by their religion to randomly and non-sensically stab non-Muslims, i.e. what he terms “syringe Jihad.”

That is the type of “scholarship,” “objective” reporting and lack of context you can expect on JihadWatch. Everything under the sun that Muslims do, or may do wrong is because they are Muslims and all of it can be linked back to Islam and Jihad.

In other news, I wonder if Robert Spencer that “defender of Western values” such as freedom of religion will report on another piece of news relating to the Uighur Muslims that came across the wire today — China’s Muslim Uyghurs Forbidden to Fast During Ramadan — for some reason I highly doubt it,

Chinese authorities in Xinjiang Province have issued a notice that any Uyghur cadres or workers found not eating lunch during Ramadan could lose their jobs.

It is part of the campaign of local authorities in Xinjiang, home to the Muslim Uyghur ethnic group, to force the Uyghur people to give up their religious rituals during the fasting month of Ramadan.

Ramadan is a holy month in the Islamic calendar, which begun this year on Aug. 22. It requires not eating during the daytime.

“Free lunches, tea, and coffee—that authorities are calling ‘Care from the government’ or ‘Living allowance’—are being offered in government departments and companies. But it is actually a ploy used to find out who is fasting,” said Dilxat Raxit, World Uyghur Congress spokesman, speaking to The Epoch Times.

According to Dilxat, Uyghur Communist Party cadres throughout Xinjiang had been forced to sign “letters of responsibility” promising to avoid fasting and other religious activities. They are also responsible for enforcing the policy in their assigned areas, and face punishment if anyone in these areas fasts.

For the first time, Dilxat said, the crackdown has extended to retired Communist Party members. Current cadres are required to visit them to prevent them from participating in the fast. If anyone violates the ban, local leaders will be held responsible and severely punished, he said.

Muslim restaurant owners are forced to sign a document to remain open and continue selling alcohol during Ramadan or have their licenses revoked, he said.

Uyghurs arrested during the July riots in Urumqi are also prohibited from fasting; those who insist on fasting will be force fed food and water while enduring insults for their misbehavior, he said in the interview.

Monks in mosques are forced to preach to others that fasting is a “feudal activity” and harmful to health, said Dilxat. Otherwise, their religious certification will be cancelled.

When asked about Chinese Communist Party (CCP) leader Hu Jintao’s recent visit to Xinjiang, Dilxat said: “Xinjiang’s situation has not yet returned to normal. Rather than asking the local Han people to respect the religion and culture of Uyghur people, Hu encouraged the use of military troops to suppress and further restrict our religious freedom. The communist regime often talks about ‘maintaining stability,’ but what they do is always different from what they say. They are actually the ones who are destroying stability.”

An Epoch Times reporter contacted the CCP’s State Ethnic Affairs Commission to see whether the restrictions claimed by Dilxat were official, or what the official stance on Ramadan was. The media contact wouldn’t speak on the subject, instead giving two numbers in Xinjiang that he said the reporter would be able to call to find out more. Both numbers were continually busy, and when the reporter called the State Ethnic Affairs Commission back, the man hung up.

The directives are communicated on official Web sites in the region, however.