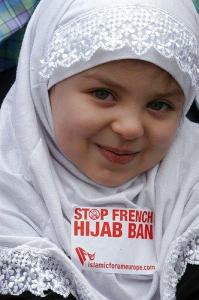 Nowadays, racists and bigots usually come up with justifications to cover up their racism and bigotry, to give cover to it and to package it in something nicer.  Bans on the Muslim headscarf (hijab) were no doubt a reflection of deep-seated Islamophobia, yet we heard politicians claiming that the bans were not targeting Muslims.  Rather, we were told, it is a reflection of Europe’s secularism, and would apply equally to religious gear of all faiths.

A recent poll, however, says otherwise: over fifty percent of Europeans favored banning the hijab from schools, but were meanwhile perfectly fine with (and in fact supported) the placement of crucifixes in classrooms.  To us Yankees, that seems downright backwards.  The hijab is something the individual chooses to wear, not the state–and therefore does not at all impinge on secularism.  Meanwhile, the crucifix is placed in the public school classroom, thereby breaching separation of church and state.

Belgium and France lead the pack when it comes to hijabophobia, and France even seems to be considering a law banning hijab in public altogether.  Secularism my ass (forgive my French).

50% of Europeans opposed to Islamic veil in schools: Study

MADRID – Just over half of Europeans surveyed opposed allowing Islamic headscarves in schools but backed the presence of crucifixes in classrooms, according to a Spanish study obtained by AFP Wednesday…

By contrast 54.4 per cent of those polled were in favour of classrooms displaying crucifixes.

In Spain and Italy, two nations with a strong Roman Catholic tradition, support for the use of crucifixes in classrooms stood at 69.9 per cent and 49.3 per cent respectively.

Support for the use of crucifixes in classrooms shot up to 77 per cent in Britain and 78.8 per cent in Denmark.

The issue of the use of Islamic headscarves has been thrust into the spotlight once again in Europe due to controversial moves by France and Belgium to ban Muslim full face veils.

Last week France announced it would seek a law to ban Muslim residents and visitors from wearing a burqa or a niqab in public, while Belgium was poised to pass a similar ban until its ruling coalition collapsed on Thursday…

Apparently, many European Christians don’t like this headscarf thing too much, but love the crucifix.  I’m pretty sure that’s a bit strange considering that the man who they believe died on the crucifix was born to this woman here: 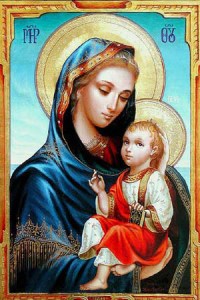 If the Virgin Mary was alive today, Europeans would say to her: you have to take that heathen headscarf off!  You can keep the crucifix, though.