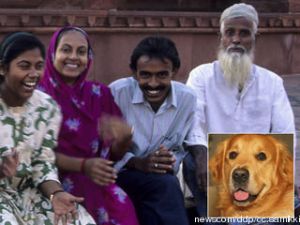 Anti-Mosque Protester To TPM: Muslims Hate Dogs And America Too

Let’s get one thing straight, Diane Serafin told me this afternoon — the people (and their dogs) protesting a planned mosque in Temecula, California tomorrow are not bigots. It’s not Muslims per se that they have a problem with — it’s the fact that Imams are slowly infiltrating American society, hoping to force Sharia law on us all.

Muslim construction projects have been the subject of public protests nationwide these days (as we’ve reported), but Serafin’s demonstration is different from all the rest. She’s calling on people to bring their dogs and join in song tomorrow afternoon because, she told me, Muslims just hate dogs and songs. Of course, Muslim antipathy toward canines isn’t their worst offense, she told me.

“They hate Jews, they hate Chrisitans, they hate women, they hate dogs,” Serafin said. “[The idea of the new mosque] scares the daylights out of me.”

“I want you to stress this — I’m not prejudiced,” Serafin told me. “I worked retail for nine years and I didn’t even know my manager was gay until someone told me. And when I found out, I didn’t care.”

Serafin is a tea party organizer in Murrieta, California — and the woman who’s helping to spread the word about tomorrow’s protest, which she says will see Christians gather outside a mosque in the Riverside County area. (The Muslims who worship at that site have been planning to build a new mosque and community center in Temecula since 2000.) Serafin runs an area tea party website, which she told me she’s used to help spread the word about tomorrow’s demonstration.

Here’s what’s really behind the Temecula mosque according to Serafin: America-hating imams are planning to build mosques “in every Christian city” so they can influence local politics, undermine our legal system and impose Sharia law on us all.

Serafin said when I asked why local officials in Temecula haven’t put the brakes on this nefarious plot by shutting down construction plans at the mosque.

“They feel there’s religious freedom,” she said. “And I know it’s there in the Constitution and everything, but everything I read says Islam is a political movement.”

“I think there’s a movement going on in the United States to take over our country,” she added.

“It’s a dream,” she said when I asked about her confidence that the increasing numbers of protests against the mosque will work and shut down the project. “I don’t know that we can do it, but if we can make people aware maybe we can slow down this movement of Islam into the country.”

Serafin said she can’t predict how many people are going to make it to the protest, but knows what will happen when it starts.

“They hate song,” she said of Muslims. “So we’re going to sing patriotic songs, Christian songs.

“God Bless America will be one,” Serafin added.