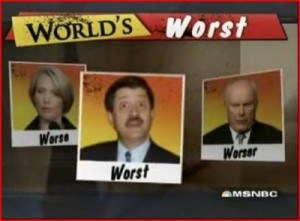 In his latest, as of this writing, blog post on his “Police Blotter,” Robert Spencer highlights a piece by Michael Medved entitled, “Disapproval of Islam is No Indication of Bigotry.” Medved writes:

The real question raised by all such expressions of public opinion should confront the nearly 40% of Americans who say they feel positively impressed by Islam and its influence.

What aspect of Muslim teaching and achievement most inspires such respondents? The daily reports of suicidal violence from every corner of the globe, with fellow-Muslims (invariably) as the primary victims? Or the well-known association of Islamic piety with open-hearted respect for the rights of women, homosexuals and infidels? Or is it the sterling record of economic progress, cutting age technology and social justice achieved by precisely those societies (like Saudi Arabia, Iran or Afghanistan) that take Shariah law most seriously? Or would Islam’s American admirers cite the record of Muslim charities in the U.S., the most prominent of which (remember the Holy Land Foundation?) have been shut down by the government for their lavish support of murderous terrorist groups like Hamas?

Quite naturally, the people who look favorably on Islam feel unconcerned over its ancient teachings or loathsome perversions in benighted corners of the globe, and focus instead on the law-abiding, patriotic, family-loving Muslims who have established benign communities throughout the United States. But even the decent people who reside in those communities rightly worry that their impressionable off-spring may become too religious, too zealous in their fervent commitment to The Prophet and his teachings.

Notice how, in a few short paragraphs, Medved cites such things as suicide terrorists, countries like Saudi Arabia, Iran, and Afghanistan, and Islam’s “ancient teachings” and infers that, therefore, Islam itself is bad.

Funny how Medved doesn’t mention all those “ancient teachings” of the Bible that demand stoning to death? Or, the fact that suicide terrorism is not a uniquely Islamic phenomenon? Moreover, Medved says:

There is no real parallel to this fear in Christian or Jewish homes. Christian parents may feel embarrassed by their religiously reborn children suddenly studying the Gospels obsessively, or witnessing obnoxiously to family or friends, but they needn’t worry about wayward kids blowing up themselves or others in the name of Jesus.

Really? What about the “Christian Bin Laden” who was arrested for plotting to blow up a women’s clinic? Or Timothy McVeigh? He was a known Christian. What about the Lord’s Resistance Army? Oh, but these are not Muslims, so they don’t count.

Jewish mothers and fathers may hate the scraggly beards and black hats adopted by a suddenly Orthodox generation, or resent the refusal to eat non-kosher food at home, but even the most fanatical of their kids feel scant temptation to travel to remote mountain hideouts as part of an international terror conspiracy.

Wow. Then, Mr. Medved must not have heard about the recent book Jewish Terrorism in Israel, written by two Israeli scholars, that documents Jewish terrorist activity dating from before the creation of the Jewish State. This is from the conclusion of the book:

It is true that radical Islamists to a certain extent justify their terrorism with their aspiration to help the Palestinian nation realize its nationalist goals and by claiming they are responding to the ongoing harm to Palestinians. However, even a movement such as Fatah, all the more so Hamas, Islamic Jihad, Hezbollah, and al-Qaeda, openly declare that they will not rest until the complete liberation of the Al-Aqsa Mosque is achieved [the Al-Aqsa Mosque is located on the same site in Old Jerusalem as the Temple Mount, the holiest site in Judaism].

On the other hand, although in much smaller numbers, there are Jews who regard the very presence of the mosques as an obstacle to the redemption of the people of Israel. A larger number hold a Kahanist worldview, according to which—irrespective of the conflict with the Palestinians—the Jewish state should cast out the Arab minority from within. Some of them are willing to try to implement this goal in a violent way or by means designed to bring about a violent escalation in the relations between Jews and Arabs.

Again, they don’t talk about Muslims, so it doesn’t count. Medved also failed to mention the comments of Rabbi Ovadia Yosef, the head of Shas’s Council of Torah Sages and a senior Sephardi adjudicator, who said that Gentiles are meant to serve Jews:

“Goyim were born only to serve us. Without that, they have no place in the world – only to serve the People of Israel,” he said in his weekly Saturday night sermon on the laws regarding the actions non-Jews are permitted to perform on Shabbat.

In Israel, death has no dominion over them… With gentiles, it will be like any person – they need to die, but [God] will give them longevity. Why? Imagine that one’s donkey would die, they’d lose their money.

This is his servant… That’s why he gets a long life, to work well for this Jew,” Yosef said.

“Why are gentiles needed? They will work, they will plow, they will reap. We will sit like an effendi and eat.

That is why gentiles were created,” he added.

You remember Rabbi Yosef…he called for a plague on the Palestinian people. Isn’t that, like, genocide?

But, wait! Medved exposes more of his worldview:

The spiritual leader of the proposed Islamic Cultural Center near Ground Zero insists that the true problem is extremism, not Islam itself. “The real battlefront today is not between Muslims and non-Muslims,” declared Imam Feisal Abdul Rauf to the Council on Foreign Relations, “but between moderates of all faith traditions against the extremists of all faith traditions.”

This ignores the huge differences –both quantitative (Islamic radicals are vastly more numerous) and qualitative (Muslim fanatics endorse uniquely murderous rhetoric and deeds) – between extremists in one faith tradition and all others.

A Christian fundamentalist may talk about burning Korans; Muslim crazies regularly burn buildings- and people. Even after Pastor Terry Jones called off his idiotic barbeque of the Islamic holy book, Muslims reacted with deadly riots in Kashmir that killed 16 and wounded sixty, while burning several schools and other government buildings.

This last statement is an over-reaching exaggeration at best. And, once again, Medved says these things while seeming to ignore all the atrocities committed by Christians and Jews in the name of their religion. It is all documented on the website: www.whatiftheyweremuslim.com. It goes to show that extremists are all the same – namely, extreme – and come from all walks of spiritual life.

But, that doesn’t fit into the neat little world of people like “Scholar” Robert Spencer and Michael Medved, and so they ingore the facts and continue on with their assertions about Islam.

This observation isn’t an expression of bigotry; it’s a factual product of reading the newspaper, and regularly monitoring international news. The lame-brained insistence that all faith traditions deserve equal respect (or equal condemnation) doesn’t demonstrate tolerance or broad-mindedness; it expresses, rather, a refusal to take any religion seriously enough for honest evaluation of its virtues and flaws.

Reservations about Islam, and even fears of the Muslim faith’s influence on the world at large, don’t constitute paranoia or intolerance. These concerns represent an honest and reasonable response on the part of a significant segment of the public to a serious global challenge to the values that Americans hold most dear.

No, Mr. Medved, your “observation” is nothing more than a repeating of the Muslim “Police Blotter,” citing the crimes of those who are Muslim and then projecting their criminality to all of Islam. It is as unfair as judging a town by its own police blotter. Now, I’m not saying that Mr. Medved is a bigot because he, obviously, has a negative view of Islam. I am only showing that the facts are not on his side.