By Emperor on November 15, 2010 in Loon Politics, Loon Radio 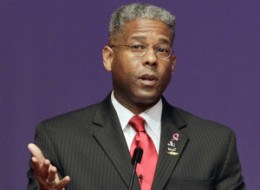 The political insane asylum in this country just gets larger and larger.

Tea Party-backed Congressman-elect Allen West (R-Fla.) broke his silence over a controversial chief of staff pick this weekend, aggressively defending his selection of radio show host Joyce Kaufman despite the fact that the decision failed to come to fruition.

Here’s CNN’s report on their discussion with West:

“I was not hiring a talk radio host; I was hiring a very brilliant political mind, someone that has been in South Florida politics for 20 plus years. But unfortunately the liberal left showed that I guess they are threatened and intimidated by me, and so they went into the attack dog mode, which is something that they did the entire time in our campaign,” West told CNN Sunday in an interview at a downtown hotel where incoming freshmen were gathering for orientation.

Reports by the “attack dog” media turned upnumerous incidents in which Kaufman had spoken with incendiary rhetoric against illegal immigrants and Muslims. Soon after the reports, she turned down West’s chief of staff offer.

According to one such glance back at her past of public speaking, Kaufman reportedly said: “If you commit a crime while you’re here, we should hang you and send your body back to where you came from, and your family should pay for it.”

Oddly enough, West seemed to contend that the examination of Kaufman’s past of extreme speech was a sign that liberals had “issues with racism” against him.

“I think the American people are sick of, and that despicable, disgusting action and the way that they went after Joyce Kaufman shows that not only this liberal left has some issues with racism,” West told CNN. “I guarantee you, if I was a black Democratic Congressman-elect, they would not be doing these type of actions, and the fact that they’re attacking a woman like this, that shows me something about sexism and misogynist behavior.”

Kaufman reportedly addressed the incident herself over the weekend, as well. This from theBroward Palm Beach New Times.

“This is not about me,” she said of the threats. “This is the first attack on this man [Allen West].” She called the incident, “an attempt to try to make us look bad,” adding, “We didn’t fall into the trap!” She said she is remembering the individuals who have “demonized” her in the last few days, the columnists, the bloggers, and that she will call them out by name soon. She said she’s already received an offer to write a book about her ordeal.