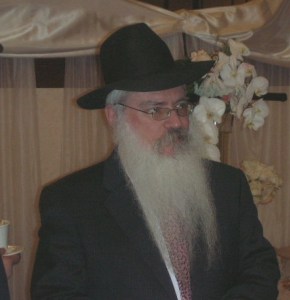 The article below is from 2009, but it goes well with Danios’ series on how “Jewish Law” can be interpreted by some in a bellicose and genocidal manner. Can one imagine if the below were said by a mainstream Muslim scholar? All hell would break loose. (hat tip: DE)

Like the best Chabad-Lubavitch rabbis, Manis Friedman has won the hearts of many unaffiliated Jews with his charismatic talks about love and God; it was Friedman who helped lead Bob Dylan into a relationship with Chabad.

But Friedman, who today travels the country as a Chabad speaker, showed a less warm and cuddly side when he was asked how he thinks Jews should treat their Arab neighbors.

“The only way to fight a moral war is the Jewish way: Destroy their holy sites. Kill men, women and children (and cattle),” Friedman wrote in response to the question posed by Moment Magazine for its “Ask the Rabbis” feature.

Friedman argued that if Israel followed this wisdom, there would be “no civilian casualties, no children in the line of fire, no false sense of righteousness, in fact, no war.”

“I don’t believe in Western morality,” he wrote. “Living by Torah values will make us a light unto the nations who suffer defeat because of a disastrous morality of human invention.”

Friedman’s use of phrasing that might seem more familiar coming from an Islamic extremist has generated a swift backlash. The editor of Moment, Nadine Epstein, said that since the piece was printed in the current issue they “have received many letters and e-mails in response to Rabbi Friedman’s comments — and almost none of them have been positive.”

Friedman quickly went into damage control. He released a statement to the Forward, through a Chabad spokesman, saying that his answer in Moment was “misleading” and that he does believe that “any neighbor of the Jewish people should be treated, as the Torah commands us, with respect and compassion.”

But Friedman’s words have generated a debate about whether there is a darker side to the cheery face that the Chabad-Lubavitch movement shows to the world in its friendly outreach to unaffiliated Jews. Mordecai Specktor, editor of the Jewish community newspaper in Friedman’s hometown, St. Paul. Minn., said: “The public face of Lubavitch is educational programs and promoting Yiddishkeit. But I do often hear this hard line that Friedman expresses here.”

“He sets things out in pretty stark terms, but I think this is what Lubavitchers believe, more or less,” said Specktor, who is also the publisher of the American Jewish World. “They are not about loving the Arabs or a two-state solution or any of that stuff. They are fundamentalists. They are our fundamentalists.” Abraham Foxman, national director of the Anti-Defamation League and a regular critic of Arab extremists, said that in the Jewish community, “We are not immune to having these views. There are people in our community who have these bigoted, racist views.”

But, Foxman warned, Friedman’s views are not reflective of the Chabad rabbis he knows. “I am not shocked that there would be a rabbi who would have these views,” Foxman said, “but I am shocked that Moment would give up all editorial discretion and good sense to publish this as representative of Chabad.”

A few days after anger about the comment surfaced, Chabad headquarters released a statement saying that, “we vehemently disagree with any sentiment suggesting that Judaism allows for the wanton destruction of civilian life, even when at war.”

The statement added: “In keeping with Jewish law, it is the unequivocal position of Chabad-Lubavitch that all human life is G-d given, precious, and must be treated with respect, dignity and compassion.”

In Moment, Friedman’s comment is listed as the Chabad response to the question “How Should Jews Treat Their Arab Neighbors?” after a number of answers from rabbis representing other Jewish streams, most of which state a conciliatory attitude toward Arabs.

Epstein said that Friedman was “brave” for stating his views so clearly.

“The American Jewish community doesn’t have the chance to hear opinions like this,” Epstein said, “not because they are rare, but because we don’t often ask Chabad and other similar groups what they think.”

The Chabad movement is generally known for its hawkish policies toward the Palestinians; the Chabad Rebbe, Menachem Mendel Schneerson, rejected peace accords with the Palestinians. Rabbi Moshe Feller, the top Chabad rabbi in Minnesota, said that the rebbe taught that it is not a mitvah to kill, but that Jews do have an obligation to act in self-defense.

“Jews as a whole, they try to save the lives of others,” Feller told the Forward, “but if it’s to save our lives, then we have to do what we have to do. It’s a last resort.”

Friedman is not a fringe rabbi within the Chabad-Lubavitch movement. He was the English translator for the Chabad Rebbe, and at the rebbe’s urging, he founded Beis Chana, a network of camps and schools for Jewish women. Friedman is also a popular speaker and writer on issues of love and relationships. His first book, “Doesn’t Anyone Blush Anymore?” was promoted with a quote from Bob Dylan, who Friedman brought to meet the rebbe.

On his blog and Facebook page, Friedman’s emphasis is on his sympathetic, caring side. It was this reputation that made the comment in Moment so surprising to Steve Hunegs, director of the Jewish Community Relations Council: Minnesota and the Dakotas.

“Rabbi Friedman is a best-selling author who addresses some of the most sensitive issues of the time,” Hunegs said. “I intend to call him and talk to him about this.”

But Shmarya Rosenberg, a blogger and critic of Chabad who lives a few blocks from Friedman in Minnesota, says that the comment in Moment is not an aberration from his experiences with Friedman and many other Chabad rabbis.

“What he’s saying is the standard normal view of a Chabadnik,” Rosenberg said. “They just don’t say it in public.”

For his part, Friedman was quick to modify the statement that he wrote in Moment. He told the Forward that the line about killing women and children should have been in quotes; he said it is a line from the Torah, though he declined to specify from which part. Friedman also said that he was not advocating for Israel to actually kill women and children. Instead, he said, he believed that Israel should publicly say that it is willing to do these things in order to scare Palestinians and prevent war.

“If we took this policy, no one would be killed — because there would be no war,” Friedman said. “The same is true of the United States.”

Friedman did acknowledge, however, that in self-defense, the behavior he talked about would be permissible.

“If your children are threatened, you do whatever it takes — and you don’t have to apologize,” he said.

Friedman argued that he is different from Arab terrorists who have used similar language about killing Jewish civilians.

“When they say it, it’s genocide, not self-defense,” Friedman said. “With them, it’s a religious belief — they need to rid the area of us. We’re not saying that.”

Feller, the Chabad leader in Minnesota, said that the way Friedman had chosen to express himself was “radical.”

“I love him,” Feller said. “I brought him out here — he’s magnificent. He’s brought thousands back to Torah mitzvah. But he shoots from the hip sometimes.”