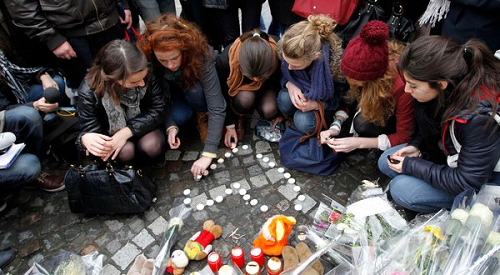 Francois Lenoir/Reuters Women lit candles on Wednesday in memory of victims at the site of a gun and grenade attack in Liege, Belgium.

On Tuesday, after the grenade attack in Belgium, Loonwatch exposed Robert Spencer’s feeble attempt to pin it on Muslims here.  He immediately jumped to the conclusion that the perpetrator, Nordine Amrani, was a Muslim with sinister Islamic motives. Spencer wasn’t alone.

Apparently the loons are unaware that Amrani is typically a Mizrahi Jewish surname. It is reckless to guess because names can be deceiving, but if Amrani’s Jewish origin is confirmed, will the loons suddenly agree with us that the religious and ethnic heritage of the perpetrator shouldn’t be relevant?

As the bigots are fond of pointing out, Nordine Amrani is of Moroccan extraction, though he was born and raised in Belgium. According to an article in the New York Times, Amrani considered himself Belgian, didn’t speak a word of Arabic, and was not a Muslim.

In the absence of facts, it seems anti-Muslim bigots just manufacture whatever sensational headlines suit their hateful agenda. Authorities say the attack is not religiously motivated:

‘No religious motive in Liege rampage’

The Belgium grenade attack which killed three people and injured 123 has sent shockwaves through the country. However, Glyn Ford, a former Member of the European Parliament, stresses that individual motives are the key to understanding such attacks.

After Nordine Amrani, who also died in the blast, went on a rampage in a central square in the city of Liege on Tuesday, there has been much speculation as to what led him to throw three hand grenades toward a bus shelter and opening fire on the crowd.

Speaking with RT, Glyn Ford said that despite earlier reports, this was not a repeat of the July 22 Norwegian massacre that left 77 dead.

Well, we don’t know, but it would appear that it was an individual incident. Earlier reports that there were three or four gunmen involved have since been discredited and it equally appears that he wasn’t targeting anybody in particular… so in a sense it’s not a replica of what happened in Norway.

Ford was also quick to counter any allegations that Amrani’s attack was religiously motivated.

Earlier reaction in many senses seems to be rather racist. He was not being identified as a Belgium when he was a Belgian citizen. Because of his Moroccan origins, people are talking about killing the Muslims;  it’s all the fault of the Muslims, and the new socialist government that’s been in office now for nearly a week is being blamed for being soft on immigrants and not reacting hard enough.

It was also reported that a rightwing extremist had gone on a shooting spree in Florence, Italy, killing two African traders and wounding three others before taking his own life. While Ford recognizes that these tragic events in Europe are a cause for concern, he argues that the European Union has done a much better job of curbing such violent crimes than the United States.

In a sense, the European track record is far better than that in the United States. The United States has these kinds of rampage attacks happening fairly regularly in schools and elsewhere. I think it’s the rather tougher gun laws that we actually have in the European Union that’s kept it down to the low level that it is, because essentially Europeans are no different than American. It’s the lack of weapons that’s kept this under control to a degree.

Ultimately, Ford says that when confronted with such events, it is better to investigate individual motives rather than jump to any immediate conclusions.

The latest Europol Data confirms that less than 1% of terrorist attacks in Europe are perpetrated by Muslims. Shooting sprees and violent rampages are usually said to be the work of a “lone wolf” with no religious motive, and they don’t count as terrorism, unless the perpetrator is Muslim. In that case, it’s terrorism done “in the name of Islam,” regardless of actual motive.

The Telegraph compiled a list of similar incidents over the last 10 years, and it appears Amrani would be the token Muslim if the loons were right about his background:

Among all the anti-Muslim hate sites, the most novel is the Roman Catholic Imperialist, which claims Anders Breivik is also a Muslim convert. Notice how frequently the word “Muslim” is repeated [emphasis mine]:

In the Belgian city of Liege known for its love of the Muslim – a Muslim kills 4 in a terrorist attack and wounded at least 75. It is not official that the terrorist is a Muslim, but all bets are that he is. The Modus operandi is the same as in all other Muslim terrorist attacks. This attack is similar to the attack in Norway by the Muslim convert Anders Behring Breivik.

The Belgian interior Ministry said the incident was not terrorism-related. Meaning of course that the man was most likely a Muslim.

No Muslims were killed ‘cept of course for the Muslim terrorist who later blew his brains out.

Breivik described himself in his Manifesto as a “culturally Christian” agnostic who wanted to restore the Knights Templar. Breivik despised Islam and viewed himself as a foot soldier in the war against the Muslim hordes. In fact, the site looks like something Brievik could appreciate.

Take another look at the photos above, folks. According to loon (il)logic, they’re all Moooslems!