By Danios on January 2, 2012 in Feature, Loon Politics 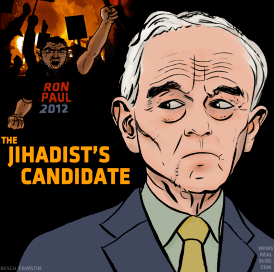 DISCLAIMER: LoonWatch has not endorsed any candidate for President of the United States.  This article should not be seen as such.

Islamophobes absolutely hate Ron Paul.  Robert Spencer of Jihad Watch and Pamela Geller of Atlas Shrugs–the King and Queen of Islamophobia on the internet–dedicate page after page on their hate blogs lambasting the Congressman and presidential hopeful.

Why do they hate Ron Paul so much?

There are three major reasons why they detest him:

(1) Ron Paul stands up for American Muslims against Islamophobia.  For example, he defended the so-called “Ground Zero Mosque,” arguing that the entire controversy was “all about hate and Islamophobia.”

(2) He has been one of the most vocal opponents of the Bush-Obama curtailments of civil liberties that specifically target Muslims.

This third reason is also why mainstream politicians and the mainstream media dislike Ron Paul and have tried their utmost to destroy him.  Fox political pundit Bill O’Reilly argued that Paul’s views on foreign policy “disqualifies him” as a candidate for president.  Here is exactly what O’Reilly said:

His foreign policy disqualifies him in my eyes as an American…

Bill O’Reilly has inadvertently touched upon something very deep and meaningful:  “As an American,” foreign policy must include waging war.  To do without war would simply be un-American.

One recalls the words of H. Rap Brown, the chairman of the civil rights group Student Nonviolent Coordinating Committee (SNCC), who famously declared in 1967:

Violence is as American as cherry pie.

Brown uttered this statement during the height of the Civil Rights Movement and the Vietnam War.  While blacks were being beaten up and hosed down in the streets of America, the United States was raining death down upon the Vietnamese population halfway across the earth.

H. Rap Brown was not the only one in the civil rights movement who linked the struggle of blacks in America to the struggle of the darker skinned peoples of the world.  For instance, Martin Luther King, Jr. called America “the greatest purveyor of violence in the world today” for its war-making:

By 1949, according to the U.S. Embassy in Moscow, “the ‘Negro question’ [was] [o]ne of the principal Soviet propaganda themes regarding the United States.” “[T]he Soviet press hammers away unceasingly on such things as ‘lynch law,’ segregation, racial discrimination, deprivation of political rights, etc., seeking to build up a picture of an America in which the Negroes are brutally downtrodden with no hope of improving their status under the existing form of government.”  An [American] Embassy official believed that “this attention to the Negro problem serves political ends desired by the Soviet Union and has nothing whatsoever to do with any desire to better the Negro’s position.”

Apparently, only the United States is allowed to saber rattle and invade countries on the grounds that the “existing form of government” is discriminatory or unjust to part of its population.

With the world’s spotlight on America’s treatment of its darker-skinned citizens–and those same citizens linking their struggle to America’s foreign wars against darker-skinned peoples–the United States moved in the direction of racial integration in the 1970’s.  America’s longest war was also grudgingly brought to an end.

But today, despite the fact that we have been waging wars for two decades in the Muslim world and in just the last couple years bombed over half a dozen Muslim countries, the anti-war movement is, at least compared to the 1960’s and 70’s, all but dead.

And that is why he is in the cross-hairs of anti-Muslim bigots, who see the world in apocalyptic holy war terms: the jihad will bring an end to Western civilization as we know it so we must destroy them first!  This is their fundamental world view, which is why sustaining and protracting the wars against the Muslim world is their greatest desire.

Ron Paul threatens that paradigm.  He dares to cogitate that it is our military interventions in the Muslim world that result in Islamic terrorism against the United States and her allies.  He had the chutzpah to include 9/11 in this: “They attack us because we’ve been over there. We’ve been bombing Iraq for 10 years.”

In the American national discourse, this is next to blasphemy.  But, in the rest of the world (especially in Muslim countries), this is not just common knowledge, it’s common sense.  In fact, nothing could be more obvious.

It’s precisely because this idea is so obvious and self-evident that it must simply never be uttered in the United States.  Anyone who does so must be condemned as unpatriotic and, worse, as Unserious.  Such a person’s character must be viciously attacked.

That’s exactly what is happening to Ron Paul.  Unfortunately, Paul deserves much of the blame for making himself such an easy target.  The racist newsletters are a gold-mine for his opponents.  Pamela Geller gleefully called them a “bombshell,” arguing that his presidential bid is now “unrecoverable” and that “[h]e is done.”

The evidence against Ron Paul, that he wrote those vile things against black people, is certainly very strong.  The only saving grace for Paul is the fact that those racist screeds do not sound anything like him.  Whether or not this alone can outweigh the proof against him, I do not know.  Whatever the case, Paul’s delay in disassociating himself from the letters, his ever-changing excuses, and his questionable associations are enough to condemn him.  (A balanced article on Ron Paul was written by the indefatigable Glenn Greenwald.)

Under normal circumstances, I’d have nothing but absolute contempt for Ron Paul.  In fact, even if he didn’t have such racism-related baggage,  a progressive like myself would have nothing to do with a man who wants to get rid of social welfare programs, the Department of Education, etc. etc.  When it comes to domestic issues, there is probably very little Ron Paul and I would see eye-to-eye on.  Worse yet, I find many of his views on such matters to be outside the realms of reasonableness–I’d go so far as to call them loony.

Yet, many progressives like myself are finding themselves inexorably drawn to Ron Paul.  That is because he is the only major presidential candidate to oppose America’s wars.  Stated another way: the rest of the candidates–including the incumbent president (who expanded the War on Terror)–are war-makers.  Ron Paul is the only peace candidate.

This says a lot about the state of our union more than it does about Ron Paul.  War-making has become such a staple of American life that the only man who stands a chance (and a slim one at that) of bringing an end to Endless War is a loony, fringe candidate with a questionable and possibly racist past.

I have been criticized by some Islamophobes for daring to say anything positive about Ron Paul.  But, the fact that a person of my views (a progressive peacenik) is forced to consider Ron Paul is indicative of how truly violent and warlike our country has become (or, rather, has always been).  This underscores my main counter-argument to the Supreme Islamophobic Myth: we, as part of the Judeo-Christian West, have been and are still, just as, if not more, violent and warlike than the Muslim world.

This fact is underscored even more by the fact that the reason why Ron Paul has been “disqualified” as a realistic candidate is because, in the words of Bill O’Reilly, of his peace-loving foreign policy.  Imagine, for instance, if an Iranian candidate for the Iranian presidency could never realistically win unless he advocated for war against other countries.  What would it say about Iranians if they, by convention and consensus, refused to elect someone who advocated peaceful relations with the rest of the world?

One would expect that progressive peaceniks like myself would have more options to choose from than just one candidate.  But because warmongering is an essential component of being president of the United States (and serving in the military is almost a prerequisite to getting elected–imagine if Iranians would demand that their leaders must have sometime in their lives fought jihad), there is virtually nobody to vote for.

In an earlier article, I wrote of how war has been a part of the American psyche since the very beginning, from 1776 all the way to the present.  We’ve never gone a decade without a major war, and no president in our history can truly be considered a peacetime president.  Yet, somehow even after waging wars for more than 91% of our existence, we look at ourselves as peace-makers and “those Moozlums over there” as violent and warlike.

A verse from the Quran is most fitting here: “When it is said to them: ‘Do not make mischief on earth,’ they say: ‘We are but peace-makers.’  In fact, they are the mischief-makers, but they realize it not.” (2:11-12)

Something else that reinforces my argument is the fact that even Ron Paul, the single peace proponent in the presidential race, does not seem to oppose war based on peacenik principles.  He usually raises financial and political arguments against the wars, instead of humanitarian ones: We’re bankrupting ourselves.  Or: These wars result in terrorism (against us).

Our moral compass should not be dictated by money or self-interest.  We should oppose these wars because killing innocent civilians is morally atrocious.  This is what should be the main argument: 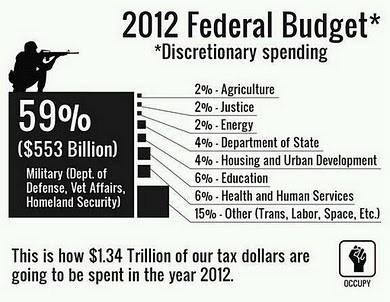 Let me clarify: there is nothing wrong with raising financial and political arguments as secondary reasons to end the wars.  In fact, I would encourage doing so.  But, the primary motivation behind opposing wars should be less self-centered (the war is costing us too much money, they may retaliate with terrorism against us, too many of our young soldiers are risking their lives over there), but more humanitarian towards the victims of our aggression: we are killing innocent civilians.

Ron Paul’s emphasis on financial and political reasons, as opposed to humanitarian concerns, seems to be consistent with his ideology.  (After all, he supported Israel’s bombing of Iraq in 1981 and seems unconcerned if Israel bombs Iran on its own accord.  This indicates to me that it is not the dead in Iraq or Iran that bothers him so much, but only that it would cost us money to kill them or would risk retaliation against us for doing so.)  What does it say about America if even the one and only supposed peace candidate is against wars not out of humanitarian reasons but financial and political concerns?

Even if I am being too harsh on Ron Paul and it’s just a political consideration to focus on financial and political reasons, what does it say about us Americans that we can only be convinced based on our wallets and not on our consciences?

I don’t say this very often, but Pamela Geller was absolutely right when she said  about Ron Paul that “[h]e is done.”  He most certainly is.  And so dies the only candidate who could have ended America’s Endless Wars.

One should point out, however, that just because the Islamophobes have found the Kryptonite that will kill Ron Paul (the racist newsletters) this doesn’t change the fact that Paul’s foreign policy views were correct.

DISCLAIMER: LoonWatch has not endorsed any candidate for President of the United States.  This article should not be seen as such.