By Garibaldi on February 28, 2012 in Feature, Loon Politics 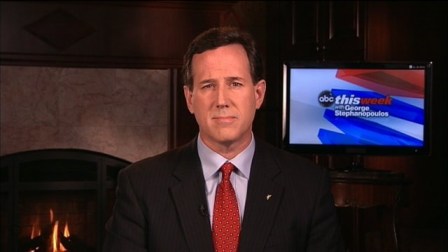 Rick Santorum on “This Week” with George Stephanopoulos

For the past several years Loonwatch writers have repeatedly made the very “significant” (and obvious) point that radical Christian Islamophobes seek to undermine the constitution of the USA by entangling church and state; i.e. undermining the separation of Church and State.

We have also pointed out that the fervent fear-mongering about “Islamization,” a fairytale concept, is nothing more than projection on the part of these radicals. (Propaganda about the “Islamization” of the USA is even more ridiculous when one considers history; the fact that America was forcibly “Christianized” by colonial settlers and their offspring.)

Many Radical Christians today believe America has changed too much and that the superior place of Christianity needs to be reasserted, i.e. re-Christianization. Not only does this thought permeate the GOP, it has infact captured the GOP. This much is clear from the ongoing reality TV circus known as the Republican primary debates.

Take Rick Santorum, it was recently revealed that he “felt like throwing up” when he first read JFK’s famous speech on the separation of church and state. He was questioned about this by George Stephanopoulos, Santorum replied that he felt like vomiting after reading the first substantive line of the speech in which JFK said, “Apparently it is important for me to state again, not what kind of church I believe in, for that should be important only to me, but what kind of America I believe in. I believe in an America in which the separation between church and state is absolute.“ Santorum went on to say,

I don’t believe in an America where the separation of church and state is absolute. The idea that the church can have no influence or no involvement in the operation of the state is absolutely antithetical to the objectives and vision of our country.

This is a leading Republican candidate for the presidency saying this, it’s not something that should be simply ignored. Can one imagine if Rep.Keith Ellison, a Muslim Congressman had said the above? For a surety the Islamophobesphere would be flailing wildly about “Islamization” and the impending Sharia take over in Ellison’s home state of Minnesota.

One must also ask where is the condemnation from loons such as Robert Spencer, a fellow Catholic? We can answer our own question, Spencer is not interested in condemning this threat because he likely agrees with Santorum. Spencer in the past has spoken in forums where he has agreed with other speakers attacking the Enlightenment. His attacks weren’t of the philosophical post-modernist variety either but couched in defense of the faith rhetoric. As I wrote at the time,

Spencer agrees with Professor Kreeft regarding the Enlightenment being a threat to Catholicism though he didn’t explicitly say that Islam was less of a threat. I can see how Ultra-Conservative Catholics may rail against the Enlightenment, it was the era which saw a secularist revolt in the name of reason against the Catholic Church and which led to formulas for the Separation of Church and State, it also witnessed the decline of the power of the Catholic Church in the temporal realm.

Santorum believes America is a Christian country, he believes the “founding fathers” meant for it to stay that way and in fact supported such a notion. I am not sure whether Santorum follows the Dominionist ideology, (an ideology that seems to plague Protestants mostly), but he clearly believes the Church has a part to play in the operation of government.

This incident reveals the deep hypocrisy and faux loyalty to the Constitution amongst many of the Islamophobes and the populist politicians who are riding the Islam/Muslim-bashing wave. Islam and Muslims are being used as a distraction that serves to 1.) make us lose sight of the real issues, and 2.) covers a darker intent of reconquista, rechristianization by any means necessary.

Lastly, I want to clarify that this post is obviously not an attack on Christianity and should not be understood that way. The great majority of Christians are as repulsed as any other citizen when they hear such inanities spewing forth from the mouths of politicians speaking in the name of their faith. They are also on the front lines actively fighting this scourge.

A very good video from the Young Turks on Rick Santorum’s attack on the Separation of Church and State: