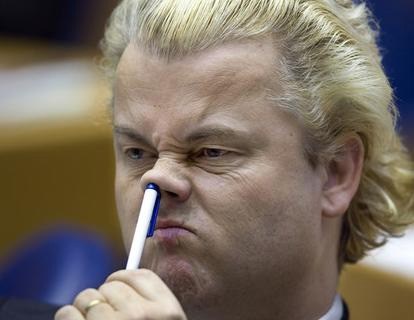 Far-right populist Geert Wilders has made a name for himself through his anti-Muslim and anti-Arab rhetoric, and for this reason he is, to quote Robert Spencer, one of the “heroes” of the anti-Muslim movement.

We have consistently pointed out however that Geert Wilders and his allies are not one stop bigots. Behind the “acceptable” attacks on Muslims is hidden a wider xenophobia against ‘the other.’ A bigotry which if not born out of any consistent ideological character is definitely a reflection of the realization that playing on the fears of the majority may lead to positive results at the ballot box.

Wilders and his party, the PVV are riding a wave of popularity through the launch of an anti-Polish/anti-Eastern European website which has been the cause of much controversy and embarrassment in the Netherlands. After launching the site it was reported that the PVV,

would gain 24 seats in parliament if elections were held today, the number of seats the party currently holds, says pollster Maurice de Hond. Geert Wilders’ populist far-right party is the third largest party in the Netherlands.

news clippings with bold headlines blaming foreigners for petty crime, noise nuisance – and taking jobs from the Dutch. “Are immigrants from Central and Eastern countries bothering you? We’d like to hear from you,” it says.

The Dutch government has distanced itself from the website but this hasn’t ebbed the disastrous PR that Wilders move has generated.

Besides criticism from ten European ambassadors and the European Commission, the Dutch public has also expressed concerns about possible repercussions. Poles are calling for a boycott of Dutch products.(emphasis mine)

The issue was taken to the European parliament which just yesterday announced its ‘dismay’ and formal response to Wilders most recent populist move:

Representatives of the political groups in the European Parliament, on 13 March, unanimously called upon the Netherlands’ Prime Minister, Mark Rutte, to condemn a website launched by his far-right political ally, the PVV party headed by Geert Wilders. Said website, up since early February, urges Dutch citizens to report problems they experience with nationals of Central and Eastern European countries. “Unacceptable,” “a disgrace,” “scandalous” – said MEPs. The European Commission, for its part, announced it would not get involved from a legal point of view and leaves the responsibility of assessing the lawfulness of the website to the Dutch authorities. A joint parliamentary resolution will be put to the vote, on 15 March (see box).

The EPP, which counts among its ranks the junior partner in the Netherlands’ government, the centre-right CDA, was particularly vocal. “We cannot tolerate, from a party that takes part in a coalition government, a call to hatred against nationals from another member state. That is unacceptable,” said EPP leader Joseph Daul (France).

Despite the fact that Rutte is part of the Liberal political family, ALDE Chair Guy Verhofstadt (Belgium) was unequivocal about condemning the “silence” of the Dutch government and the message sent by the website. “My group has nothing but contempt for Mr Wilders’ initiative.” Recalling the need to be even-handed in criticising populist tactics, Verhofstadt lumped together French President Nicolas Sarkozy and Wilders. “I wonder who is the extreme-right wing candidate [in France], is it [Marine] Le Pen or Sarkozy?” he asked.

Reactions from other political group leaders all condemned Rutte’s passivity, whose hands are tied by his need for Wilders’ support, and who thus claims it is not a governmental issue. S&D leader Hannes Swoboda (Austria) called for the website to be closed down. Polish deputy Jacek Kurski (EFD) said Rutte’s lack of reaction is “scandalous”. “The prime minister [of the Netherlands] is not taking up his responsibility,” said Marije Cornelissen (Greens-EFA, Netherlands). “The prime minister ought to have directly condemned this website,” said Peter van Dalen (ECR, Netherlands), adding, however, that the EP holding a debate on this issue is “too much honour” for Wilders.

Justice Commissioner Viviane Reding, who had already condemned the PVV website in February, welcomed the comments made in the plenary chamber. “It is unacceptable that EU citizens become target of xenophobic attitudes because they have exercised their right to move from one state to another,” she said. Reding also called upon on the Dutch authorities to “fully investigate the lawfulness of the website under Dutch law and Union law”.

According to Marie-Christine Vergiat (GUE-NGL, France), this is not enough. “You continue to refer to member states and their tribunals but I thought that the Commission was the guardian of the treaties, that freedom of circulation and non-discrimination were part of the European values,” she said. “I notice that certain values are more important than others and that in economic matters when the free circulation of goods and capital is concerned, competition barriers the Commission is prompter to condemn,” added Vergiat.