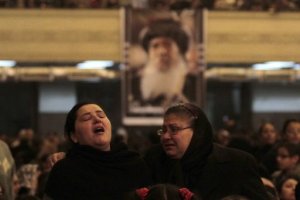 JihadWatch’s anti-Muslim fear-mongering director Robert Spencer likes to selectively highlight the most egregious and sectarian statements by Muslims to further his hate agenda against Islam/Muslims.

In the wake of the death of the Coptic Pope Shenouda III he posted a piece about how a cleric named Wagdi Ghoneim said that the death of Pope Shenouda was a “relief” because the Pope caused “sectarian strife” and sought to make Egypt into a “Coptic state.”

To address that specifically, I wonder if the irony is lost on Wagdi Ghoneim, he accused Pope Shenouda of having furthered “sectarian strife” but by writing what he did he himself engaged in “sectarian strife.”

While there are small fringe groups of Copts who wish to turn Egypt into a Coptic state, trying to push this concept as emerging from the Pope, or the mainstream of Copts is similar to the “Islamization” myth that ironically Spencer and his acolytes regularly engage in. The Pope himself was a nationalist and opposed “foreign intervention” and stated that while Copts are “marginalized” in Egypt they are not “oppressed.”

That said, the main point I want to highlight is the fact that Robert Spencer is attempting to shift focus from the overwhelming support and expressions of condolences and grief from Muslims for the passing of the Pope. He chooses one cleric and tries to attribute it as the general feeling of Muslim Egyptians.

This couldn’t be further from the truth.

“His holiness lived and died as a loyal patriot to his country,” Parliament Speaker Saad el-Katatni, an Islamist, told a joint meeting of the two chambers of parliament Saturday.

Sheikh Ahmed El-Tayeb, Grand Imam of al-Azhar, the highest seat of religious learning in the Sunni world, offered his condolences to the Egyptian people for such a great loss, saying,

“Egypt has lost one of its rare men at a sensitive moment when it most needs the wisest of its wise – their expertise and their purity of minds.”

“His death is a tragedy and a great loss for Egypt and its people of Muslims and Christians.”

Freedom and Justice Party, the Muslim Brotherhood’s political arm and the party with the largest majority in parliament stated,

“The Freedom and Justice Party sends its deepest condolences to the Egyptian people and our Christian brothers over the death of Pope Shenouda III,” FJP leader Mohamed Mursi said.

Presidential contenders such as Amr Moussa and Ahmed Shafiq also expressed their sadness,

“We have lost a great value and a pre-eminent pope,” said Ahmed Shafiq, another presidential contender, and a Mubarak-era prime minister.

Here is a picture of Egyptian Christians expressing their thanks and reciprocating the “love” they received at the death of their leader:

Egyptian Christians stand in front of a picture of the late Pope Shenouda III after receiving condolences from both Muslims and Christians. Signs read in Arabic (H/T: ZH): “We feel your love. Thank you, Muslim brothers and sisters”