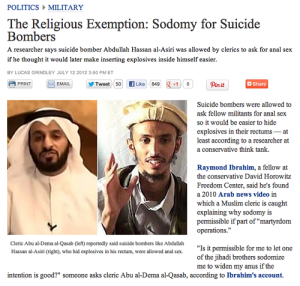 The Sodomy for Jihad hoax is making rounds all across the looniverse, on hate sites like Jihad Watch, Frontpage Magazine, and Winds of Jihad. Canada’s right wing Sun News also published the story and featured commentary from the ubiquitous native informant, Tarek Fatah.

The story even made its way onto an well-known U.S. based national gay and lesbian news magazine before it was debunked by the Electronic Intifada.

Screenshot from The Advocate article The Religious Exemption: Sodomy for Suicide Bombers that shows a photo collage with an erroneous caption.

Note: This post contains a translation of a sexually explicit and defamatory joke targeting Muslims

The Advocate, an important US-based national gay and lesbian news magazine, has published a homophobic, racist, sectarian and Islamophobic hoax as if it is actual news.

Raymond Ibrahim, a fellow at the conservative David Horowitz Freedom Center, said he’s found a 2010 Arab news video in which a Muslim cleric is caught explaining why sodomy is permissible if part of “martyrdom operations.”

“Is it permissible for me to let one of the jihadi brothers sodomize me to widen my anus if the intention is good?” someone asks cleric Abu al-Dema al-Qasab, according to Ibrahim’s account.

Although the cleric reminds everyone that sodomy is forbidden, he offers an exception.

Origins of a Hoax

This claim reported by The Advocate is pure nonsense. It is a hoax purveyed by someone affiliated with the David Horowitz Freedom Center, an extreme right-wing organization whose founder and namesake is well-known for uncivil and racist attacks on liberal, progressive and leftist political groups.

The Advocate’s source is Raymond Ibrahim, a fellow at the Horowitz Center and at the Middle East Forum, who claimed that the religious directive was contained in a “2010 Arabic news video that aired on Fadak TV” and was advice given to Abdullah Hassan al-Asiri, who blew himself up in an attempt to assassinate Saudi Prince Muhammad bin Nayif in 2009. Some press reports stated that al-Asiri had carried explosives in his rectum.

In his post on the Gatestone Institute, Ibrahim elaborates:

Apparently a cleric, one Abu al-Dema al-Qasab, informed al-Asiri and other jihadis of an “innovative and unprecedented way to execute martyrdom operations: place explosive capsules in your anus. However, to undertake this jihadi approach you must agree to be sodomized for a while to widen your anus so it can hold the explosives.”

This is the video he’s writing about.

To a non-Arabic speaker, it would be reasonable to believe that the person speaking in the video is “Abu al-Dema al-Qasab” because Ibrahim does not give any context to the video. Apparently The Advocate believed this, because it posted a screenshot of the man from the video next to a photo of al-Asiri with the following caption:

However, the person in the video is Abdallah al-Khallaf, host of “The morals of the Prophets, Peace Be Upon Them,” a show broadcast on UK-based satellite channel Fadak TV whose target audience is Shia Muslims.

In the video, al-Khallaf tells the audience that he is going to read an item from a website called “Muntadayat Usud al-Sunna” (Lions of the Sunnah forums).

Al-Khallaf reads the item from the website as if it is real. He also characterizes the alleged protagonists as “Wahhabis.” It appears his intention is to incite his audience’s disgust at the supposed thinking and behavior of Wahhabi Sunni Muslims who, he suggests, will justify anything in pursuit of their goals.

I found the likely source that Abdallah al-Khallaf reads in the video. The Internet Archive includes a forum post from 28 August 2009 on montdiatna.com.

The text appears to be at best an extremely vulgar joke and at worst sectarian defamation. It is written in a style commonly used for stories in which both the teller and listener know it is a joke or fiction.

The Electronic Intifada has translated this text into English. Please be warned that it contains very explicit language and imagery:

It is said that the terrorist who blew himself up in an attempt to assassinate Prince Muhammad bin Nayif inserted capsules of explosives in his anus like suppositories.

It is said – only God knows – that before he acted, the terrorist asked a sheikh, that he intends to insert explosive capsules in his rectum, seeking jihad, in order to carry out jihad operations, in desire for virgins.

The terrorist asked the sheikh the question in the following way: Our Sheikh, May God give you martrydom and virgins in paradise. I want to carry out a martrydom operation and so I presented myself to “Sheikh Bloody Butcher” [Sheikh Abu al-Dema al-Qasab].

He told me we devised a completely new and unprecedented way for martyrdom operations and that is to put explosives in your rectum. And in order to train you for this method of jihad you must agree to be sodomized for a period in order that your anus will be widened such that your rectum can take the explosives.

And my question, God have mercy on you: Is it permitted to offer my anus to one of the mujahidin brothers if the intention is pure and the goal is to train for jihad, and to widen my rectum?

The jurisprudential rule says: necessity overcomes what is forbidden. And if the only way to carry out a duty is with a certain thing, then that thing becomes a duty, and there is no greater duty than jihad.

After you are sodomized you must ask forgiveness from God and praise him abundantly and you must be certain my son that on Judgment Day, God rewards the mujahidin according to their intentions, and your intention, God willing is the victory of Islam.

This text, or versions with slight variations, can be found on several other websites by searching for the name “Sheikh Abu al-Dema al-Qasab” in Arabic.

Several features identify this story as a tasteless joke, especially the name “Sheikh Abu al-Dema al-Qasab.” It translates to Sheikh Bloody Butcher. This is not a real person. The post is peppered with phrases like “it is said” and “only God knows” which indicate storytelling.

The Advocate was a cornerstone of the LGBT civil rights movement, providing serious journalism and analysis since 1967 for a community that suffered discrimination and even violence as it struggled for legitimacy and recognition…