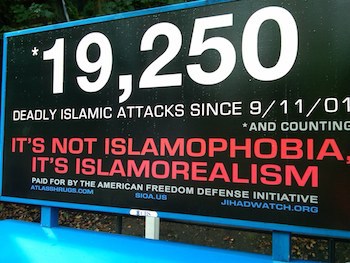 The above ads are appearing at Metro-North stations in New York. A continuation of Islamophobic activists Robert Spencer and Pamela Geller‘s AFDI/SIOA racist and anti-Muslim/Islam advertisement campaign.

In light of recent hate attacks, 8 over a period of 11 days, and another possible attack yesterday, the attempted firebombing of a Muslim family’s home in Panama City, Florida, can we not consider such advertisements to be an incitement to violence?

If these ads are not a form of “false advertisement,” at the very least they are a form of false and inaccurate information that is being disseminated to the general public, making the masses more ignorant.

Factually, the number of “*19,250 Islamic attacks (*and counting)” is a purposeful fabrication. To label such attacks as “Islamic” is not only offensive but a dangerous and ignorant essentialization of Islam and the very broad and variegated phenomenon of terrorism in Muslim majority countries and the West. It tells us nothing about the so-called “terrorist” attacks themselves; what criteria was used to judge them “terrorist” or “Islamic”; nor about who or what created the “terrorism.” It purposefully reinforces the Islamophobic myths that Islam, a religion of over 1.5 billion people worldwide, that is over 1400 years old is a unified, monolithic and totalitarian force that is inherently obligated to wreak random and terrible violence. Also notice the intentional and shameless exploitation of 9/11 in the ad, “…Since 9/11/01.”

What is strangely not mentioned in the advertisements is that this so-called “Islamic Terrorism ticker” that gives us the oddly precise round number of 19,250 is taken from the anti-Muslim website “The Religion of Peace” (TROP). In a previous article I pointed out that the methodology by which TROP arrived at these inflated numbers is very deceptive.

Even a cursory glance at TROP’s list of so-called “Islamic terrorist attacks” reveals it to be nothing more than a deeply biased, propagandistic spin-job that conflates:  real terrorist attacks, (semi)religious/culturally motivated crimes, attacks on military personnel and attacks by secular groups with no ideological basis in Islam — all in theaters of occupation, civil war and separatist conflict.

I cited a sampling of the attacks they claimed were so-called “Islamic terrorism” from a period of just one month that on further inspection proved not to be related to either “terrorism” or “Islam.” Many of the attacks listed by TROP relate to nationalist insurgencies, such as the conflict involving Baluchi nationalists seeking independence from Pakistan. Some of the attacks listed by TROP are in fact crimes committed by Muslims or people with Muslim sounding names that have nothing to do with Islam or terrorism, such as honor killings, the killing of local policemen, petty assault, etc.

In the end I wonder if there are any actionable grounds to contest these advertisements? Even though they are not selling a product they are promoting hate propaganda based on fabricated and faulty information, and hence are doing an immense disservice to the general population.

The Metro-North is once again the center of a controversy over potentially offensive billboards.

Greenburgh Town Supervisor Paul Feiner is urging Metro-North to put up ads of its own in response to “inflammatory” postings in the Hartsdale station.

The ad in question, sponsored by the American Freedom Defense Initiative, lists the number of deadly Islamic attacks since 9/11″[This needs to be challenged and not just stated as fact–Ed.] and says “It’s not Islamophobia, It’s Islamorealism.”

Feiner says the ad can’t be removed, but is offensive. He wants Metro-North to warn passengers that the ads could be upsetting and don’t represent Metro-North’s views or that of the community.

“There are many Muslims residing in Greenburgh and in our villages,” he said. “They should not be discriminated against. the posters encourage hatred, discrimination and do not help the efforts to fight hate crimes.”

After lots of feedback — positive and negative — from residents concerning the ads, Feiner added that he will recommend the Metro-North donate profits from the ad to education campaigns against discrimination.

“I feel it’s not a violation of free speech for Metro North to put up a competing sign and it’s also not a violation of free speech if they donate the profits to an anti-defamation league or an organization that objects to hate crimes,” he said. “I feel that it should be clear that the people of Metro North and the town do not support this message.”

AFDI executive director Pamela Geller said the ad is not hate speech, but merely a statement of fact.

“There is nothing hateful, mean-spirited, or offensive about opposing jihad terror,” she said in an email. “Are the facts offensive? It is, as the ad says, Islamorealistic. Islamic supremacist imams around the world foment violence, promote hatred, teach children to hate, and exhort Muslims to gain a place in Paradise by murdering infidels.”

The MTA lost a recent federal court case to Geller, who sued after the MTA banned an advertisement, saying it violated standards prohibiting language that demeans an individual or group.

The MTA declined further comment and said its position has not changed on the issue.

Feiner is not the first politician to complain about offensive advertisements on the railroad: The MTA faced a controversy in July over potentially offensive billboards concerning the Israel-Palestine conflict.