By Garibaldi on September 27, 2012 in Loon Blogs, Loon Sites

The sick servile minds of the Islamophobes know no depths of depravity that they aren’t willing to revel in; EDL Review takes them to task for circulating lies in the Islamophobic looniverse.:

Islamophobic sites like IslamVersusEurope, BaredNakedIslam and Vivienco, have been posting and regurgitating a story claiming that a 53-year-old ‘Muslim’ inhabitant of El Ejido abused, and raped a female horse (click on the names for their articles). But the story has been manipulated and has been a petty attempt to demonise Muslims.

First of all, it’s extremely strange that these sites have provided no or little source or reference to the story they are mentioning. Secondly, the author fails to give the name of the rapist, and only gives the initials ‘M.A’. Why? Is it so we don’t find out that this incident never even happened? Thirdly, earlier news reports (like this) only say the man was ‘African’. There was no mention of his faith.

A real-looking picture of a dead horse has been added into the manipulating articles, giving the impression it’s the same horse that was ‘raped’. As you can see, BaredNakedIslam even claim it is.

But this picture isn’t even of the incident! It’s a four-year-old picture that has been used previously in a Spanish news article titled ‘Wild horses cause three accidents in recent days Carnota’ (here), explaining how some Spanish workers were injured when crashing into horses on a road!

Clearly, these websites have been manipulating people by twisting things for their biased agenda. Only the gullible have been believing them without checking their accuracy, like the English Defence League (EDL) Surrey Division. 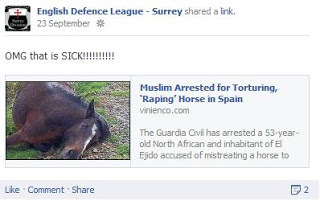 Note: We have exposed sites such as Vivienco before when they circulated a similar duck rape article and blamed it on a Muslim. The story was alsomanipulated. Read about it below.