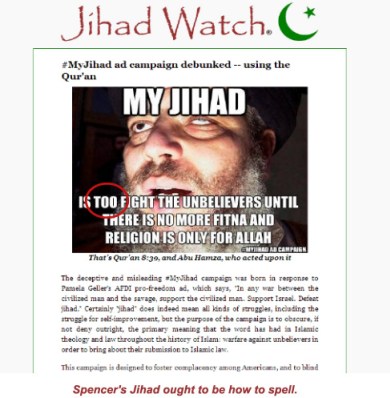 Garibaldi of Loonwatch wrote about a recent twitter exchange between terrorist inspirer and pseudo-scholar Robert Spencer and Civil Rights activist Ahmed Rehab. Spencer was forced into undermining his career long effort to demonize Islam and Muslims, reluctantly conceding that the term Jihad means more than “terrorism” and “violence,” a position he is loathe to share on a daily basis with his readers since it doesn’t fit his scheme of evil Muslim hordes Islamizing the universe.

This fits a pattern of doublespeak on Spencer’s part: on the one hand he tells his audience that there are “no distinctions between peaceful and violent Muslims” and that the “only good Muslim is a bad Muslim,” yet when pressed in public about his positions he backtracks, and says things like, “Islam makes a lot of people be very moral and upright and live fine lives.”

This brings us to Spencer’s recent double speak, in which he tells his fans that the “true meaning” of Jihad is the one that is forwarded by radical Muslim preachers. Intriguingly, Spencer finds himself in the unenviable company of agreeing with extremists such as Omar Bakri, Anjum Chaudhry, Osama Bin Laden and others who believe that the targeted killing of innocents is a legitimate expression of Jihad in Islam.

Spencer’s article begins by first trying to delegitimize the #MyJihad campaign, he writes,

“The deceptive and misleading #MyJihad campaign…”

Off the bat one can see that Spencer has already made up his mind, for him anything that runs counter to the “Jihad is evil” mantra is unacceptable. That is why he is eager to hide the true import of the campaign: giving voice to how millions of Muslims relate to Jihad in their daily lives. The #MyJihad campaign also clearly states on both its website and Facebookpage that its goal is, “taking back Jihad from anti-Muslim and Muslim extremists alike.”

One would think that if Spencer was honest about promoting peace and justice (words he bandies about meaninglessly), and not being anti-Muslim he would welcome such an initiative. Of course Spencer would be out of a David Horowitz Subsidized job if he welcomed the campaign. Spencer goes on to write,

This campaign is designed to foster complacency among Americans, and to blind them to the fact that Islamic jihadists are committing violence in the name of jihad around the world every day.

Spencer is worried by the educational potentiality of the #MyJihad campaign and attempts once again to obfuscate its message. Clearly Spencer missed the memo about what this whole campaign actually is about, let’s repeat it for him,

“taking back Jihad from anti-Muslim and Muslim extremists alike.”

Robert Spencer’s many faulty claims regarding Jihad have been directly debunked in Danios’ Understanding Jihad series. In this series Danios tackles Spencer’s assertions one by one, adding context and facts and also criticizing the enormous falsities Spencer forwards about Jihad, thereby putting “Jihad” in proper perspective. This may be the reason why to this day Robert Spencer refuses to reply to Danios’ rebuttals in the series and has also ran away from Loonwatch’s open invitation to debate.