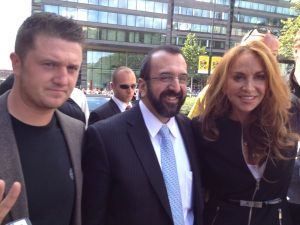 SION’s closest UK allies are in deep water. On top of 53 EDL activists being arrested, EDL leader Stephen Yaxley-Lennon (aka Tommy Robinson) was also arrested by Met police for entering the USA illegally.

Tommy has been released on bail pending further enquiries and he has taken to Twitter to reveal how much trouble he is actually in.

Not forgetting several court cases that are pending with Robinson, he appears to be on the point of being remanded in prison for entering the USA illegally last month.

Tommy writes “Been arrested for fraud for flying to America for invitation to speak in new York on Sept 11th. Met police are a joke …#political policing”

He also claims he has been arrested on suspicion of assaulting the Luton based Islamic extremist Sayful Islam.

Tommy isn’t happy, but if his Twitter claims are true I am !! 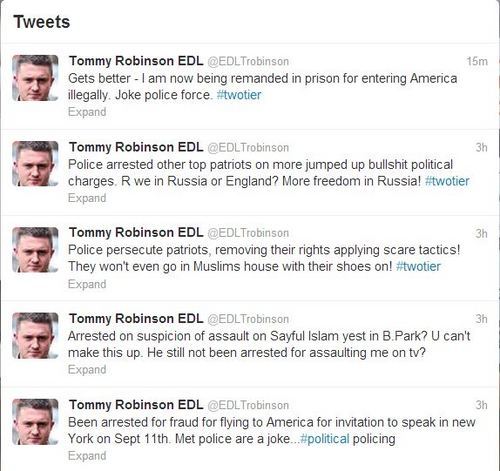 For more on the arrests of Yaxley-Lennon and his comrades, see: “Tommy Robinson Remanded: In Custody for Entering the US Illegally“, “Tommy Robinson and 53 EDL supporters held after Police Motorway Sting,” and the “Statement by the Met Police.”

This may bode ill for Pamela Geller considering the fact that (according to an article by the British anti-racism organisation “Hope Not Hate”) at the time Geller is also on record as claiming that she was involved in “sneaking Yaxley-Lennon into the country,” it will be interesting to see if she is arrested/prosecuted by the relevant US immigration authorities too. Yaxley-Lennon appears to have been aware that he was in trouble about all this, as last week he tweeted Geller about his recent trip to the US and expressed his wish to privately discuss matters further: http://twitpic.com/b3ceqv/full.

Pamela Geller is going hysterical at the moment on her blog ranting with the usual verbal diarrhea about the UK government being “dhimmis” and “weak” and how this is an unprecedented attack on “freedom fighters” like herself, etc. Sounds like she is scared that she will be exposed  in this mess as well.