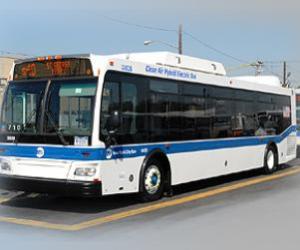 Sounds like a lot of legal minutia that could have gone either way. At the end of the day I don’t think it would be a big issue if Pamela Geller‘s ads about “Leaving Islam” were to go up. I find her racist Ayn Rand “Savages” ad more problematic and likely to be rejected.

Of course Geller is going bonkers over the issue, framing it as “Shariah law” submission and the whole lot, when it has to do with technical legalese rather than any impending “dhimmi” capitulation to “Islamization.” But what do you expect?:

CINCINNATI (CN) – The public transit authority in southeastern Michigan has the right to ban advertisements that it deems political for targeting Islam, the 6th Circuit ruled.

Though a federal judge in Detroit had previously granted the American Freedom Defense Initiative (AFDI) an injunction, a three-judge appellate panel upheld the viewpoint-neutral ban on political advertising enforced by the Suburban Mobility Authority for Regional Transportation (SMART).

AFDI, a nonprofit that “acts against … government officials, the mainstream media and others,” had said that SMART violated its First Amendment rights in refusing to run its ad promoting the website RefugeFromIslam.com.

The ad read as follows: “Fatwa on your head? Is your family or community threatening you? Leaving Islam? Got questions? Get Answers! RefugefromIslam.com.”

In granting the injunction last year, U.S. District Judge Denise Hood noted that SMART had allowed an atheist advertisement by the Detroit Coalition for Reason.

The appellate panel rejected this comparison, however, because “the atheist advertisement could be viewed as a general outreach to people who share the Detroit Coalition’s beliefs, without setting out any position that could result in political action. The fatwa advertisement, however, addresses a specific issue that has been politicized.”

Advertising space on SMART buses is a nonpublic forum, according to the ruling. “SMART … has completely banned political advertising, showing its intent to act as a commercial proprietor and to maintain its advertising space for purposes that indicate that the space is a nonpublic forum,” Judge John Rogers wrote for the court. “Allowing the discussion of politics would likely decrease SMART’s revenue,” he added. “For example, if a fast-food restaurant sold advertising space on the side of its store to a neo-Nazi political group for a campaign advertisement, the restaurant would be likely to lose business. Similarly, SMART’s ridership likely would diminish were SMART to allow political advertisements.”

After confirming that SMART’s policy against political advertising is permissible, the panel concluded that “it was reasonable for SMART to conclude that the content of AFDI’s advertisement – the purported threat of violence against nonconforming Muslims in America – is, in America today, decidedly political.”

The panel cited AFDI’s own complaint for evidence of its political agenda, writing that “the complaint explains that AFDI ‘promotes its political objectives by, inter alia, sponsoring anti-jihad bus and billboard campaigns, which includes seeking advertising space on SMART vehicles.’”