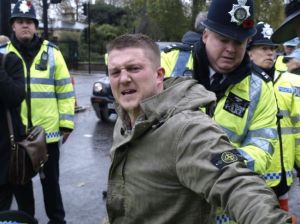 Pamela Geller and Robert Spencer are raising money for head EDL boss Stephen Yaxley-Lennon (aka Tommy Robinson) who was arrested for using a false passport to enter the USA and attend Geller’s anti-Muslim rally on 9/11.

Geller and Spencer are both raising funds for Yaxley-Lennon, and involvement in the conspiracy to illegally bring Yaxley-Lennon over may includeNew York State Senator David Storbin. (h/t: Jai)

Pamela Geller writes about the plight of English Defence League leader Stephen Yaxley-Lennon (aka “Tommy Robinson”), who was recently arrested:

Many of you have responded to my article “Darkness Descending in England” by asking how to help. Legal funds are badly needed. Tommy’s situation in prison is terrible, and they urgently need to raise funds to pay lawyers to address this situation and provide him with the best possible legal defense.

Donations to Tommy’s legal fund can be made online via the EDL website here. Please, do it. SION as well as AFDI are contributing, in addition to all of the other work we are doing, This is a priority. Robinson and Kevin Carroll are part of our international team, members of SION’s President’s council, key players in the worldwide struggle for freedom.

Robert Spencer, as ever, is providing the chorus, with a piece entitled “Urgent: Help defend Tommy Robinson from a monstrously unjust leviathan state apparatus”.

Carroll and Robinson attended an anti-Islam conference organised by Geller in New York on 11 September; Carroll memorably waved around British tabloid newspapers bearing headlines about Christianity in the UK. Robinson’s presence was curious; as the anti-EDL site EDL News noted:

…in September 2010, Robinson travelled over to the United States to attend a 9/11 event with other far right extremists. Upon arrival he was detained at John F Kenedy airport for several hours, refused entry and was then deported. No doubt due to his links with the far right and his lenghty criminal record, which has increased significantly since then with a spell on remand in the UK, a conviction for assault and three days inside a Swiss prison for a rooftop protest that went wrong.

One explanation is someone in high places has pulled strings for Robinson to enter the country. Robinson claimed on Twitter last night that he was sat next to New York State Senator David Storobin.

Now, however, it has been reported that

He tried to use a passport in the name of “Andrew McMaster” to enter the United States on September 10 this year, Southwark Crown Court heard.

Of course, at this moment in time the claim is just an allegation, and we should not infer guilt ahead of legal action. However, it is difficult to see in the arrest evidence of “sharia inspired victimisation”. It has also been noted that Robinson sent a Tweet to Geller on 10 Oct, asking for her phone number and adding ”Think there will be some activity this week about my trip to the usa”.

Robinson has also mentioned another allegation:

Arrested on suspicion of assault on Sayful Islam yest in B.Park? U can’t make this up. He still not been arrested for assaulting me on tv?

I blogged on Islam’s assault on Robinson (a slap through a car window) here. It should be remembered that Robinson is reluctant to involve the police in such matters.

A second element in the story is the arrest of 53 EDL members on a motorway soon afterwards; according to the BBC:

The men were heading to a location in east London, but police have not revealed where they were due to gather.

All 53 were arrested on suspicion of conspiracy to cause public nuisance, the Metropolitan Police said.

The arrest of over 53 people in the United Kingdom is the beginning of the end for once-great Britain. The leaders of the English Defence League (EDL), Tommy Robinson and Kevin Carroll, were among those arrested, as well as Paul Weston of the British Freedom Party (BF).

…According to Carroll, Robinson was incarcerated for leaving the United Kingdom and entering the United States fraudulently for our September 11, 2012 Stop Islamization of Nations free speech conference in New York City.

…This is a defining moment in British history, as significant as any major turning point. It is in many respects like the Night of the Long Knives, which marked the point of no return from Nazism for Germany.

Geller’s historical parallel means that she’s comparing the EDL to the Brownshirts, although presumably this is unintentional. Carroll was arrested separately, while Weston was later arrested for breach of the peace while “demanding” information about Robinson at Wormwood Scrubs prison in west London. This turned out to be the wrong location; Robinson was in fact at Wandsworth.

Up until the middle of last year, Geller and Spencer were wary of association with EDL; the alliance was finally cemented in June. Having invested so heavily in the organisation, they have no other option than to continue aggressively to assert a narrative of political persecution; but one wonders if privately they have reservations. The video below, uploaded by “MrlaughingattheEDL” and expanded upon by EDL News, suggests there is good reason for them to be cautious.