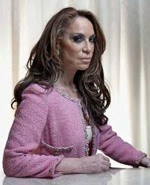 Typical Geller hysteria. This is what we can expect over the next four years, more of the same. (h/t:CriticalDragon):

Loony Pamela Geller: Petraeus Resignation Is an Obama Plot to Put a Muslim in Charge of the CIA

The right wing universe is now in full-bore conspiracy theory mode over the resignation of CIA Director David Petraeus, just as I predicted. It’s a case study in the conservative movement’s decline into bad craziness; they’re all muttering darkly about cover-ups and hidden connections and “questioning the timing.”

One of the most brain-dead of the wingnuts, loony hateblogger Pamela Geller, has a typical post on the subject; for her it’s all part of the Islamic supremacist stealth shariah takeover of America, of course:

I do not believe it was the real reason was [sic] an extramarital affair. I believe it was Benghazi. He refused to be the fall guy. When did an affair ever stop a Democrat. If anything….

Perhaps one of Obama’s many Muslim Brotherhood advisors are on the shortlist to replace him.