By Garibaldi on February 2, 2013 in Feature, Loon Pastors 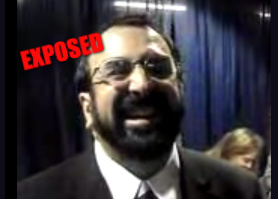 For quite some time it has been known that Robert Spencer, according to his own testimony, is a Catholic of the Maronite Melkite tradition. However what has not been discussed has been the extent of his involvement with the Church. Spencer attempts to portray himself as a “freedom fighter” (nothing could be further from the truth), fighting “Islamization” and the “savage” Muslims. Presenting himself as an “objective” scholar (though he has no qualifications when it comes to Islam) and a blogger while downplaying his other prominent roles in life.

In light of the recent and welcomed news that the Catholic Diocese of Worcester disinvited Spencer from a speaking engagement at an upcoming Men’s Conference, it is clearer why he was invited in the first place: he is an active Catholic deacon.

In a 2002 article by Shawne K. Wickham, a certain Robert Spenser (his name is spelled wrongly) is cited as studying to become a Melkite deacon. Spen(s)er discusses the idea of “bringing heaven to earth,”

Robert Spenser, who is studying to be a Melkite deacon, recalls an old story of the emissaries who were sent out into the world by the Slavic king to investigate various religions, and happened upon a Byzantine church service in Constantinople. “We didn’t know if we were on heaven or on earth,” they would report back.

“I think the idea of bringing heaven to earth, and having a taste of heaven on earth is one of the reasons people come here,” Spenser said.

In 2002 Spencer (this time with his name spelled properly) is listed as “Associate director of Educational Services” at Our Lady of the Cedars Church:

Associate to the Director of Educational Services – Robert Spencer of Manchester, NH. Robert Spencer is in the Diaconal Formation Program and has been active in the home-school movement.

Spencer, Deacon Robert Our Lady of the Cedars E-mail : robtspencer@myfairpoint.net

In 2011, Spencer also wrote an article for Crisis Magazine, a Catholic publication on his Church titled “We are Non-Roman Catholics.”

A 2012 PDF document from Our Lady of the Cedars lists Spencer’s ordination at the top of the masthead.

This information also provides further insight into the reasoning behind Spencer’s anti-Muslim/Islam hate activism. What has been known for quite some time through Robert Spencer’s own statements and declarations (such as his 2003 interview with the Washington Times and his “debate” with his former college Professor Peter Kreeft) is that his Crusade against Islam and Muslims is colored by an extremist Christian supremacist theology that views Islam and Muslims as the ultimate existential threats to “Christendom.”

Is this what the Catholic church is all about? I happen to believe it is not, especially considering that surveys of Catholic Americans show that the majority have positive views of Islam and Muslims. The fact that Spencer is out of step with mainstream Catholicism is also underscored by the fact that the National Catholic Reporter applauded the cancellation of his speech by the Worcester diocese.

If anyone should understand what it feels like to be discriminated against based on religion, it is Catholics. They have faced a history of prejudice in the United States, thus it is odd that such a hostile, and at the least, very controversial figure would assume a leadership role in their church.

And presumably, a portion of his income from his anti-Muslim rants goes to the church. There is one link that shows him as a “platinum” donator to a church function, and another one where he gives a “generous” gift to have a Pantocrator icon installed in the church.

Lastly, we must call out Deacon Spencer’s hypocrisy: In the Melkite tradition, women are not allowed to enter the Holy Place, where the altar stands, and girls are not allowed as altar servers. But of course Spencer rails about discrimination against women in Islam yet he doesn’t notice such blatant discrimination happening in his own tradition. A case no doubt of,

Thou hypocrite, first cast out the beam out of thine own eye; and then shalt thou see clearly to cast out the mote out of thy brother’s eye. (Matthew 7:5)

Update: Robert Spencer kneeling before the altar, decked out in full green regalia? 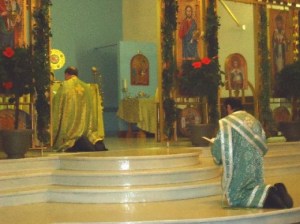 Spencer here follows the example of the late Paul Weyrich, whom he regarded as a mentor-figure, although Spencer’s Melkite affiliation also reflects his personal circumstances: he is of Greek Orthodox heritage (family displaced from Turkey) and married to a Catholic, and so a form of Catholicism that follows an Orthodox style has obvious attractions.

Some of Spencer’s books include the name of the priest of his church among the acknowledgements, although the church itself does not appear to promote the kind of anti-Islam polemicising for which Spencer is notorious. In 2006 Spencer promoted a report about a speech given by then-US Melkite leader Archbishop Cyril Salim Bustros, in which Bustros made criticisms of Islam; however, Bustros did not resort to the kind of rabble-rousing rhetoric and sloppiness that are Spencer’s hallmarks.