By Garibaldi on March 16, 2013 in Feature, Loon Pastors, Loon Sites 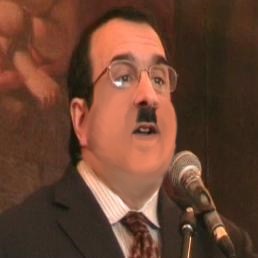 Hate group leader, Far-right Catholic fanatic and anti-Muslim Crusader/terrorist-inspirer, Rev. Deacon Robert Spencer of Our Lady of the Cedars Church, a full-time paid shill for racist David Horowitz has been pretty sore that I exposed the fact he is an ordained deacon. The only person that he should be upset at however is himself, he’s the one who irresponsibly left an internet trail that could easily be found by anyone with basic google searching abilities.

It is understandable why Rev. Deacon Spencer, who claims to be an objective “reporter” on so-called “Islamic violence” was so upset, any remaining veneer of “objectivity” and feigned concern for “freedom” was permanently abolished; once again Robert Spencer’s sectarianism was exposed through his own words and deeds.

This point is buttressed in a post yesterday by Rev. Deacon Spencer in FrontPageRag, it is the first post by Rev. Spencer on new Pope Francis I. What does the good Deacon have to say? Well, he slams the Second Vatican council’s positive statements regarding Islam as reflecting “the outlook of a vanished age,” equal in its irrelevance as statements by the likes of Pope Benedict XIV of the 18th century and Pope Callixtus III of the 15th century. (By the way, Rev. Spencer is opposed to Vatican II for more reasons than just statements regarding Islam).

Bizarrely, Spencer still cites the two Popes quite approvingly, the hostility they had towards Islam and Muslims is strikingly evident in two quotes Spencer reproduces,

…Pope Benedict XIV, in 1754, reaffirmed an earlier prohibition on Albanian Catholics giving their children “Turkish or Mohammedan names” in baptism by pointing out that not even Protestants or Orthodox were stooping so low: “None of the schismatics and heretics has been rash enough to take a Mohammedan name, and unless your justice abounds more than theirs, you shall not enter the kingdom of God.” Pope Callixtus III, in a somewhat similar spirit, in 1455 vowed to “exalt the true Faith, and to extirpate the diabolical sect of the reprobate and faithless Mahomet in the East.”

Spencer absurdly believes the Vatican II reforms are in parity with quotes about “extirpating” Islam. Look up “Extirpate” in the dictionary, it still means “to root out and destroy completely.”

It appears Rev. Deacon Robert Spencer is setting himself up for a lifetime of disappointment. Pope Francis I will not be the kind of fanatical anti-Islam/Muslims-rolling-back-Vatican-II-type-pope that Spencer wants him to be. After all, the new pope is named after St. Francis of Assisi whose two chief concerns were to convert people to Christianity and to help the poor.

In fact, St. Francis came to oppose the Crusades (read: The Saint and the Sultan by Paul Moses) which Rev. Deacon Robert Spencer falls all over himself to defend, as he loves to remind us of the Crusader slogan, “God wills it!“

The story goes that St. Francis’ parents wanted him to go out on the Crusade so that he could be knighted.

He later set out for the Crusades in Northern Africa, but while on his way to join up with his batallion he heard a voice that asked him where he was going.

Francis responded “to the Crusades” and the voice asked him “why he served the squire instead of the Master.” The voice told him to return to Assisi where he would be told what to do. Later, after much prayer and penance, Francis was praying at a small chapel outside of Assisi, San Damiano and he thought he heard a voice that came from the crucifix. The voice said, “Francis, go repair my Church, can’t you see that it’s falling into ruins.”

The new Pope Francis I will focus on repairing the Catholic Church which is struggling in many ways and will not focus on breeding Crusader-esque civilizational conflict.

Rev. Deacon Robert Spencer’s irrelevance both to Catholicism and scholarship on Islam is only matched by his delusional indulgence in conspiracy theory. Unable and unwilling to respond to numerous Loonwatch rebuttals of his faulty pseudo-scholarship and “police blotter reporting,” and a very long outstanding fear to debate Danios has now given way to Spencer claiming to have uncovered my identity–unbeknownst to me I am actually supposed to be Aslan Media editor Nathan Lean!

What is Rev. Spencer’s smoking gun? A cross-post from the hate site Logan’s Warning claiming “evidence” that I, Garibaldi, am Nathan Lean. Recall the only time we’ve mentioned Logan’s Warning, a post titled, Amusing Islamophobia Blog Wars: Logan’s Warning vs. Brigitte Gabriel, in which Christopher Logan attacked Brigitte Gabriel for even hinting that there might be such a thing as a “moderate Muslim.” The heresy! Logan’s website is replete with an abundance of commenters who call for Crusading violence against Muslims and racism against Arabs, as was shown in screenshots in my post.

So it’s no surprise that Spencer would cross-post from Logan’s Warning, as we know “birds of a feather flock together.” It is also unsurprising that Spencer, with a track record for weak scholarship would be so gullibly convinced by Christopher Logan’s “evidence.”

Evidence 1: Recently in writing about Mr. Spencer, Garibaldi wrote this in a comment on his own article about Spencer’s private life:

He is not celibate, he’s married. In the course of digging on the internet, I also learned the name of his wife and children, though that isn’t really germane to the discussion so I won’t advertise it.

Who else has dug on the Internet and found the names of Mr. Spencer’s wife and children? Nathan Lean. Spencer has written of Lean: Nigeria Jihadists threaten country’s top spies by publishing their home addresses and names of family

Four months after that, he sent Mr. Spencer an email calling him a “dumb fuck” and adding “But, having a look at this, I kind of pity you,” which was followed by a link containing a photo of a woman in the same city. The woman has the same surname Spencer; apparently Lean thought she was his wife.

Spencer apparently thinks this is evidence. Anyone who has access to google can find out the names of Rev. Deacon Spencer’s family, it’s all over the internet. I thought Spencer was supposed to be in mortal fear for his life? If so he’s doing a poor job of covering up the identities of his family and place of residence. The fact is we have had people who’ve wanted to share information regarding his personal life and whereabouts since 2010.

One commenter on Spencerwatch named “Abdullah” wrote on the site in 2010 saying:

I have all the information on Spencer, his address, real date of birth, and information on his family. I want nothing more than to share it, please e-mail me.

We responded to Abdullah by letting him know that we were not interested in Spencer’s personal information:

That will be unnecessary. We have no interest in Spencer’s private life. We are only interested in exposing the shallow, deceptive, and bigoted nature of his anti-Muslim work.

My comment is consistent with our long-held position that our only interest is rebutting and exposing Rev. Deacon Robert Spencer’s faulty arguments, lies, hate, deception and distortions, we can care less about Spencer’s family.

Evidence 2:
Garibaldi wrote of Mr. Spencer in a comment:

But the shaggy walrus beard and so forth indicates its him.

I told you. I’m into women not walruses.

Evidence 3: Garibaldi interviewed Aslan for Loonwatch. Most of the interview was made up of nasty ad hominem attacks on Mr. Spencer: http://www.loonwatch.com/2011/11/exclusive-loonwatch-interview-with-reza-aslan/

I’ve also interviewed Haroon Moghul. Does that mean I’am Haroon Moghul as well? And why am I Nathan Lean and not Reza Aslan? Or maybe I am all three-in-one, like a super stealth Islamist-Leftist trinity?

Yes, Schanzer did get the vicious Garibaldi treatment, but that was more so because he’s a Bush era, warmongering neo-Con schmuck who wrote an Islamophobia-denial piece in the mainstream Wall Street Journal that sought to exonerate war criminals like his former boss George W. Bush and Islamophobe pals such as Daniel Pipes and the useful idiot Zuhdi Jasser. I fail to see how this can be described as evidence and not more appropriately as “worthless conjecture 4.”

Nathan Lean is a Thug

Loonwatch is actually consistent in its opposition to hacking, we ourselves have been victim to vile hatemongering “counterjihad” hackers. As for my article it actually did not celebrate Mona Eltahawy’s protest of the racist AFDI/SIOA hate ads. In fact I was critical of her, writing,

Mona’s method of protest was therefore ineffective, aesthetically unappealing and not the best expression of street art. It is unclear if Mona was going to spraypaint a message before her confrontation with Hall, but using a hot pink spraypaint can to completely erase or cover the hate ad, which is what she was doing, is a bad way to register such a protest. It is poorly planned, poorly executed and at the end of the day strays from the goal of highlighting the most important aspect of such a protest: the message.

I happily admit however that I am not really moved to condemn any protest against the racist AFDI/SIOA hate ads. Just as I wouldn’t condemn protests against ads describing Native Americans as “savages,” or Blacks as “N—–s.”

Interestingly, this most recent foray into conspiracy theory by Rev. Deacon Spencer wasn’t even convincing to Spencer’s most ardent fans. Kinana of Khaybar, in what could be the most understated comment on JihadWatch ever wrote,

This is entertaining, but to me does not add up to sufficient evidence that Nathan Lean is Garibaldi.

One also has to wonder if Logan and Spencer even thought about asking themselves why Nathan Lean, who has been speaking, writing and publishing publicly for quite some time would decide he needed to be anonymous? He is already calling out Spencer, Geller and other Islamophobes under his own name.

As for my real identity…

the second love child of Malcolm X and Stanley Ann Dunham, and my name is Barack Hasan Shabazz!

There you go, the secret is finally out! Thanks a lot Spencer!