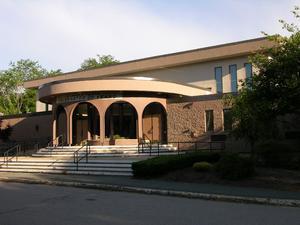 It is sad and dangerous when a religious institution actively allows itself to be used as a platform for hate-mongers who have inspired terrorists and incite hatred and prejudice against Muslims.

Ahavath Torah Synagogue, led by the Betraying Rabbi Jon Hausman has a long history of allowing itself to be used in such a way, for instance making the pulpit available to the likes of Geert “no religious freedom for Muslims” Wilders and Wafa “nuke ’em” Sultan.

Both Ahavath Torah Synagogue and Great Neck Synagogue should be ashamed of themselves; real embarrassments to Judaism.

Each of these individuals possess deep knowledge forged by years of involvement. No doubt this will prove to be an enlightening evening.

*This event is co-sponsored by Act for America and Michael Graham’s “New England Talk Network”.

Pamela “the looniest blogger ever” Geller will be speaking to Great Neck Synagogue:

Geller will be introduced by Greg Buckley, whose son, Lance Corporal Greg Buckley, Jr., was one of three Marines killed in a “Green on Blue” insider attack on his military base in the Helmand province, Afghanistan on Aug 10.