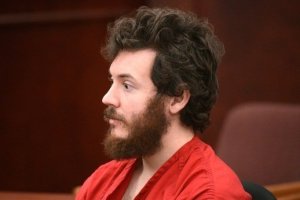 “Every action is based on intention”–Islamic maxim

What more can one say about the loony, imbecile world of the “counterjihad,” any and everything, no matter how obscene and absurd confirms a preset conclusion; Islam and Muslims are inherently evil.

As if reading out of the Protocols of the Elders of Mecca the desperate legions of anti-Muslim invective made haste to proliferate a Daily Mail article about the alleged jailhouse conversion of James Holmes and his supposed ex-post-facto justification of the atrocity perpetrated in Aurora, Colorado.

FrontPageRag‘s favorite genocidalist Daniel Greenfield ran the story, saying it may be another prisoner going “Mohamedan behind bars.” Those self-proclaimed “Jihad experts/reporters,” Spencer and Geller, found the story too juicy to pass up, claiming Holmes was just acting out his own #Myjihad, with Geller speculating if “it was a recent conversion or was there some knowledge about his leanings before the shooting?”

Interestingly, the Daily Mail article itself notes that Muslim inmates are “not happy” about Holmes trying to link his massacre to Islam. So what you have in effect is an allegedly nutty James Holmes and the Islamophobes agreeing with one another about what is and can possibly be Jihad, and the third party, ACTUAL Muslims telling us that there is no way their religion could possibly have anything to do with Holmes’ horrific actions. Oh, the irony!

One does not even have to wonder whether the media or Islamophobes would react in a similar manner if Holmes converted to Judaism or Christianity and proclaimed to justify his actions through those religions!

In any case it is important to highlight the fact that the report on his “conversion” is unverified and relies on “anonymous” sources.

Did Aurora Shooter Convert to Islam?

James Holmes, the alleged Aurora, Colorado, movie theater shooter, has reportedly converted to Islam while in jail. Emphasis on reportedly.

Holmes’ rumored religious conversion has been widely rumored, yet scrutinized by some media sources, citing a lack of credible evidence.

The Daily Mail first ran with the story that Holmes converted to Islam in jail and is now a dedicated Muslim who prays five times a day.

The newspaper received the tip from a prison source, who noted Holmes’ beard, in his most recent court appearance, as evidence of his conversion.

“He has brainwashed himself into believing that he was on his own personal jihad and that his victims were infidels,” the source said of Holmes.

He now abides by a Muslim diet and studies the Quran, supposedly.

The prison source said other Muslim inmates are not happy, given that “They don’t want their religion to be connected to that awful shooting.”

Questions about Holmes’ conversion to Islam started circulating once the Washington Times published the story, with Salon offering heavy scruntiny.

The site discusses the questionable sourcing, noting the unnamed prison source as a problem, as well as the Daily Mail’s history of false reports.

Salon’s main point was that people just ran the rumor as fact:

“It’s entirely possible that Holmes has converted to Islam, and even that he brainwashed himself into ex-post-facto justifying his killing,” the site says.

Yet while “James Holmes is severely disturbed, by all accounts, and could delude himself into thinking anything,” ties to Islam are far from established.

Salon contends that Islam itself has become the story here:

“If Holmes suddenly became a devout Pentecostal or Hindu in prison, would bloggers be connecting the religion to the shooting in the way they are now?”