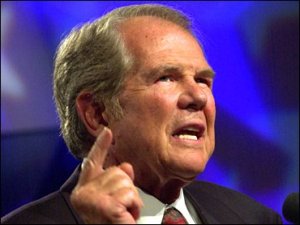 Right-wing Christian evangelist and famed Skeletor impersonator Pat Robertson is at it again, implying that the Boston Bombings were committed by Muslim terrorists. To be clear for the hundredth time, no one knows who committed this horrible act, or why. And it is completely disrespectful to both the victims of the tragedy, and to the nation’s and world’s Muslim communities to continue to declare that all terrorist actions are committed by Muslims, especially when there is absolutely no evidence to back up these claims. Watch the video here.

Pat Robertson On Boston Bombing: “Don’t Talk To Me About ‘Religion Of Peace,’ No Way”

ROBERTSON: Our hearts go out to these people who were wounded and injured. On a joyous day, Patriots’ Day, in Boston and the Boston Marathon draws people in from all around the world, about 26 or 7 thousand participants about 17,000 I understand it finished — crossed the finish line before this bomb went off.

But to think that somebody would be so vicious, so evil as to want to kill little children, and maim families who were there rejoicing in a sporting contest on a beautiful day in Boston, it just makes you sick at your stomach. Don’t talk to me about religion of peace, no way.

View all posts by Haddock →