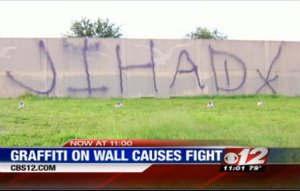 I know one place that needs a #MyJihad campaign: Florida.

Some Southern Florida citizens went into freakout mode when they saw the word ‘Jihad’ tagged on the side of I-95 North near Delray Beach, not too far from Miami.

Obviously it was something that they thought had deeper implications, feeding into conspiracies about “stealth Muslim infiltration” and “terrorism.”

One “bigoted-in-a-wide-eyed-naive-way” Floridian Islamophobe by the name of Andrea Mitchell, a Conservative blogger was positive (without any actual proof) that Muslims were behind the tagging:

[T]he author behind the conservative blog, Fire Andrea Mitchell, authoritatively wrote that “Muslims” were behind the graffiti. “No individual Muslims have been caught from this,” the author wrote. “I wonder how many Mosques there are in the area.”

Nothing like a veiled threat to sweeten your morning.

The tag even prompted a heated exchange between a man named Damon Rosen and an impressive passerby who argued that the tag was “just a word” and for his fellow Floridians not to go berserk.

…a CBS12 segment, which showed a man named Damon Rosen embroiled in an ugly confrontation with another man over the graffiti.

The commentariat, in response, has been merciless.

“DARK CLOUDS OF JIHAD,” intoned one commenter on a blog called Atlasshrugged2000, “gathering over the Sunshine State.”

On YouTube, Carol Bellinger wrote: “They must not realize that Jihad means a holy war, which means to secure a holy place beside Allah, you must kill a non-believer… Now that is scary.”

(Actually, as defined in the Quran, the term Jihad specifically means “to struggle in the way of Allah,” and is used 41 times in the Quran, most often in description of someone “striving in the way of God.” Though some scholars of the Quran say the word can also denote military pursuits.)

The “Jihad” tag was also found on a sticker attached to an electrical box on 4th Avenue in the town.

Hmmm. A wall tagged with “Jihad” and a sticker with the word “Jihad?” These seem to be the well  known tell tale signs of a tagger, a vandal, a participant in one of the four elements that make up the sub-culture of hip-hop: graffiti.

Taggers are known to take up pseudonyms that they then emblazon on city walls, mail boxes, highway walls, etc. all in an effort to “get up” i.e. become famous and known in the world of graffiti.

In that sense these South Floridians may have done the tagger an inestimable favor by taking him or her out of obscurity and giving them free publicity.

In any case, it is absurd to draw the conclusions that these poor folks have. This does not, rest assured, portend a “Holy War” or some clash of civilizations with Delray Beach, rather it is as the passerby said “just a word” scrawled on a wall, on a highway.