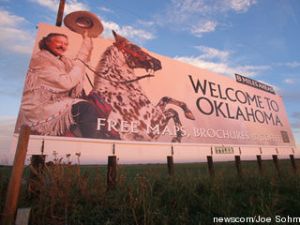 Where it all began.:

Chief U.S. District Judge Vicki Miles-LaGrange in Oklahoma City permanently blocked state officials from certifying the 2010 election results for the so-called “Save Our State Amendment,” which “forbids courts from considering or using international law [and] Shariah law” when deciding cases.

Seventy percent of voters approved the constitutional amendment on Nov. 2, 2010. It had been placed on the ballot after state lawmakers passed a similar measure, House Joint Resolution 1056, about six months earlier.

Two days after the election, Muneer Awad, the former head of the Oklahoma chapter of the Council on American-Islamic Relations (CAIR-OK), challenged the amendment’s constitutionality in federal court.

He called the amendment “ridiculous” and a “gross transgression of the Establishment Clause,” as it could void legal contracts between Muslims, though courts are allowed to consider the traditions of other religions. He said no other state constitution “attaches special burdens on a religious tradition.”

“The goal was to stigmatize Islam by establishing in the public’s mind that Islam is something foreign and to be feared,” Awad argued in his motion for a preliminary injunction.

Miles-LaGrange granted a temporary restraining order on Nov. 9, followed by apreliminary injunction a few weeks later, after the judge said she needed more time to decide.

The 10th Circuit upheld that injunction in 2012, citing the state’s failure to identify a “compelling interest based on an actual problem.”

A few more plaintiffs have since been added to the amended complaint, including two Muslim faculty members at the University of Oklahoma and CAIR-OK’s current executive director, Adam Soltani. Awad moved to Manhattan last August for a job with another CAIR affiliate.

Miles-LaGrange made her preliminary injunction permanent on Thursday, saying the state “failed to assert a compelling state interest” for singling out Shariah law in its courts. This violates the Establishment Clause of the U.S. Constitution, which bars the government from endorsing a particular religion, she wrote.

The amendment cannot be salvaged by severing the references to Shariah law, she said, because its whole purpose was to ban Islamic law.

“Having reviewed the numerous statements by the legislators who authored the amendment, it is abundantly clear that the primary purpose of the amendment was to specifically target and outlaw Shariah law and to act as a preemptive strike against Shariah law to protect Oklahoma from a perceived ‘threat’ of Shariah law being utilized in Oklahoma courts,” she wrote.

She said voters approved it for the same reason — as a “referendum on Shariah law” — because all public debate, radio ads, robocalls and articles “primarily and overwhelmingly” focused on the Shariah provisions.

The American Civil Liberties Union and CAIR issued a press release saying the judge “got it right.”

“We’re very pleased with the result, which will help secure religious freedom and equality for all Oklahomans,” said Daniel Mach, director of the ACLU’s Program on Freedom of Religion and Belief. “Throughout the case, the state couldn’t present even a shred of evidence to justify this discriminatory, unnecessary measure.”