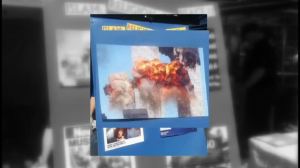 BARTLETT, TN -(WMC-TV) – A booth at a festival for family fun is sparking outrage in Bartlett. Action News 5 received calls about a booth covered with anti-Muslim displays. One caller was too afraid to go on camera, but stated she found the display inappropriate and offensive.

Although there was not much left in W.J. Freedman Park in Bartlett when Action News 5 arrived, one booth did stand out.

Sponsored by the ACT! Memphis, a national non-partisan group concerned about the threat of radical Islam, the booth showed a picture of the fiery World Trade Center towers on September 11, right next to a photo of President Barack Obama.

ACT! Memphis organizers confirmed they paid $50 to set up at the Bartlett Festival. They also stated the festival was sold out until another vendor offered them an extra spot.

However, the organizer would not go on camera and claimed the national group ACT! for America does not do interviews that can be edited. According to this individual, the organization only does live interviews.

As for the City of Bartlett, the application for all groups asks for a description of the group’s booth. Yet, it did not offer any guidelines for who can and cannot apply.

Bartlett Mayor Keith McDonald confirmed that ACT! Memphis was at the festival.  McDonald did not have a comment on whether the group’s content was appropriate.