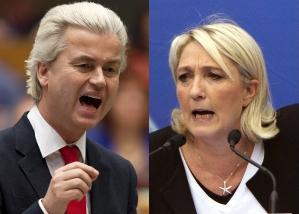 The leader of France’s nationalist Front National is meeting Geert Wilders, leader of the Dutch anti-Islam party PVV, on Tuesday and the two will hold a joint press conference about their plans for the European elections.

The aim of Marine le Pen and Wilders is to create a strong anti-EU block within the European parliament. Wilders has spoken several times of his efforts to form a pan-European grouping.

In order to form an official group within the European parliament, Wilders and Le Pen need to deliver 27 MEPs from seven different countries. The PVV and Front National are currently ahead in the opinion polls.

Wilders has already made approaches to the Vlaams Belang, Italy’s Lega Nord and the UK Independence Party, the Volkskrant said earlier this year. UKIP and Sweden’s Democrats have refused to join an alliance with the Front National.

The PVV and Front National have different views on both Israel and homosexuality. Wilders has made a point of supporting Israel and gay rights.