By Emperor on December 23, 2013 in Loon Politics, Loon Sites, Loon-at-large 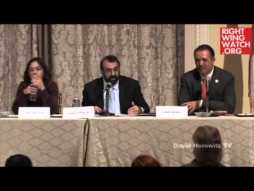 Rep. Trent Franks of Arizona was one of the politicians  involved in promoting the book, “Muslims Mafia,” by the now retired and disgruntled racist Islamophobe, David Gaubatz.

Franks recently shared a panel with the former adviser to Israeli Prime Minister Benjamin Netanyahoo, Caroline Glick and Rev. Deacon Robert Spencer who, not for the first time, indulged in the “Obama is a Muslim” conspiracy theory–Franks agreed with him.

Rep. Trent Franks (R-AZ) appeared at a David Horowitz Freedom Center function last month where he agreed with a co-panelist who said Obama may be a secret Muslim, or is at least acting like one. Franks sat on the panel with anti-Muslim activists Robert Spencer, Erick Stakelbeck and Caroline Glick. A member of the audience asked Spencer — to laughter and applause — that if the Quran dictates that apostates must face execution, “If so, how does this apply to Obama? And if so, what should we do about it?”

Spencer replied that the president’s religion is “murky, probably intentionally so.” He went on to say that because you don’t hear Muslims “calling for Obama to be executed as an apostate” for leaving Islam for Christianity, then it is likely he is still a Muslim.

“With so many hotheads and firebrands and hardliners, you would think that somebody would say that, unless maybe they know something,” Spencer said.

He went on to argue that Obama’s Christian faith is further proof that he’s a Muslim, explaining that he can still be a Muslim while he identifies as a Christian. Spencer added: “Whatever his personal beliefs are, certainly if he were a secret Muslim, he wouldn’t be acting any differently from how he is anyway.”

“That’s exactly right,” Franks said. “He wouldn’t be any different.”