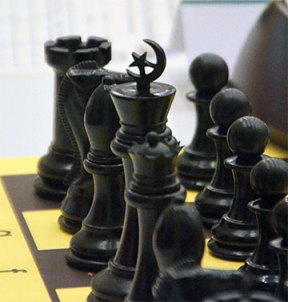 In the widely used Staunton chess set, the king is topped with a Christian cross. At this years’s World Youth Chess Championship in the United Arab Emirates, a new design has been introduced. The Christian cross has been replaced by the Islamic crescent.

Robert Spencer is outraged. He has accused “Islamic Supremacists” or “forcing” non-Muslim children to play with the “Islamized” chess sets. The horror!

Judging from Spencer’s outrage, one might think European Christians invented chess, and the Muslims are trying to co-opt “their” game.

In fact, Chess was brought to Christian Europe by Muslims.

The precise origins of chess are unknown, but the game is thought to have originated in ancient India or Central Asia, and from there, spread to Persia. When the Arabs conquered Persia, chess was taken up by the Muslim world and subsequently spread to Europe.

One of the world’s oldest chess sets was found in Afrasaib, near Samarkand in Uzbekistan. The set included a king, chariot, vizier, horse, elephant, and 2 soldiers.

The traditional Staunton chess set Robert Spencer is defending as sacred is actually the product of European “Christianization” of earlier designs.From

The original Indian and Islamic game was adapted to reflect medieval European society, so that the Indian war elephant was replaced with the figure of the bishop. The rooks biting their shields resemble the Viking berserkers of Norse myth, while the pose of the queens is derived from depictions of the grieving Virgin Mary. The pawns, lacking any human features, reflect the abstract pieces used in the Islamic version of the game.

Are Muslims reclaiming the game of chess in the Name of Islam? Of course not. Many cultures have influenced chess over its 1500 year history, and unless you’re a paranoid “counter jihadist,” there’s no reason to view those contributions as divisive or sinister.

..The photo above of some of the chess sets being used in this year’s tournament in Al Ain are just the icing on the cake. Traditional chess kings have a cross on the top (a design that has been in use for centuries). But this year in the UAE, they’ve removed the cross and replaced it with an Islamic crescent. A veteran chess player tells me: “In my entire life playing chess I have never seen such a thing.”

Some of the children in this year’s tournament are being forced to use these sets: here are some photos from the actual playing hall with participants using the Islamized sets..

…As you will see, only some of the sets have this Islamic design — probably because few have been made as yet, and the organizers need thousands of sets for such a huge tournament. So the majority of sets under use are “normal” style. But even so, the Islamic supremacist implications of the new design are self-evident. This is not a big deal, but obviously it was to the Emiratis who went to so much trouble to alter the set. Why not leave it as it was? Was it because of Islam’s abhorrence of the cross?

UPDATE: The Islamized sets are in wide use…

Pamela Geller has cross posted Spencer’s article on her blog Atlas Shrugs, and added her own paranoid twist:

Robert Spencer has broken the story that in the UAE, the World Youth Chess Championships are listing Israeli players as from the country “FIDE” (World Chess Federation), and are using Islamized chess pieces (above). If the Jews win the tournament, there will be a worldwide terror alert! All free nations must go to Defcon 5 — expect embassies to burn and millions to march and call for death to the Jews. The magic Islamic chess pieces will have lost their mojo — Allah is not pleased. Allah may be akbar, but these chess pieces will have proved not to be.

Yes, Pam, climb onto your broom and head to the UAE. You and your minions must save the world from the Muslim rage that will no doubt follow if the “magic Islamic chess pieces” fail to defeat “the Jews.”