By Ilisha on January 1, 2014 in Feature, Loon Media, Loon People 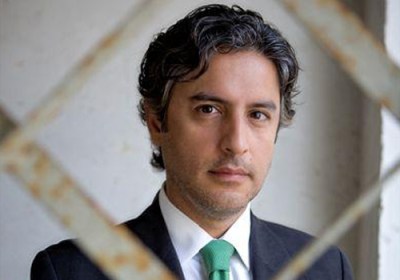 As we’ve noted before, Robert Spencer seems to have an unhealthy obsession with Reza Aslan. Sadly for Spencer, his interest is not reciprocated.

In this case, serious engagement would elevate Spencer and give him a veneer or credibility he does not deserve. The best response to irredeemable loons is laughter and ridicule. Aslan has responded by teasing Spencer about a man crush:

1. You don’t actually think I read the drivel you send me do you? You’re a clown and the only proper response to clowns is laughter. Unless of course your obsession with me is motivated by something else. In that case, I must tell you that I’m flattered but you’re really not my type.

2. I don’t know how else to tell that I’m just not attracted to you. You and I are never going to get together Robert. You should stick to men your own age and weight.

4. Ok. Fine. I’ll think about it. But first you have to shave and lose some weight.

5. If I send you a picture will that satisfy your lust for a while?

Undeterred, it seems Spencer continued, and received this response:

Dear Mr. Spencer. This is Mr. Aslan’s assistant. You seem to be under the impression that Mr. Aslan is actually opening, reading, and responding to your emails. I assure you he is not. The email responses you are receiving are automated responses set to respond to your emails indefinitely. You can’t actually think he is interested in reading anything you have to say. Mr. Aslan is a world renowned, best selling scholar. There is nothing about you or your “work” that would interest him in the slightest. Still, we hope that you will keep up your writings about him. Not only does everything you say validate Mr. Aslan’s importance. But you are a source of immense amusement for our team. Thank you.

Spencer actually posts these responses on his website, apparently proud he managed to get a response at all. Undeterred, he recently attempted once again to engage Aslan.

His latest onslaught was sparked by an interview with Sarah Harvard in DL Magazine. Spencer accused Aslan of being an “Islamic supremacist” who thinks Christianity teaches reincarnation:

ASLAN: It has to do with the symbolism and metaphors that Islam provides to think about God. All of that actually made more sense to me. When I think of God, I think about it in the terms of radical unity, which Islam talks about, and less in the terms of the trinity and reincarnation, which Christianity talks about. That’s it. My faith hasn’t changed. The language in which I use my faith has changed. 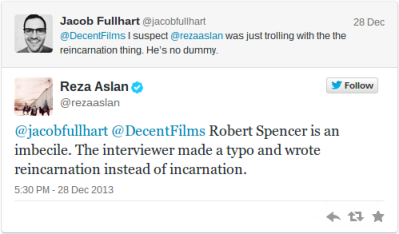 In turn, Spencer described Aslan as an “immature, foul-mouthed creep,” and wrote [emphasis mine]:

This is at least the second time Spencer has made this accusation, having devoted a previous article to the topic of Aslan’s alleged belief that Christianity teaches reincarnation.

Reza Aslan wrote an entire book devoted to the life and times of Jesus. If he believes that Christianity teaches reincarnation, it seems likely he would have said so in his book. A search on Kindle reveals his book mentions the word “reincarnation” only once, and the reference is not literal:

Malachi’s prophecy explains why the courtiers at Tiberias see in Jesus the reincarnation of Israel’s quintessential end-times prophet. Zealot, The Life and Times of Jesus of Nazareth, p.130

In contrast, the word “incarnation” is mentioned six times, on pages 12, 36, 105, 138, 170, and 213. In reference to the trinity, Aslan mentions the notion of Jesus as God “incarnate,” which in fact is a widespread Christian teaching:

The Incarnation in traditional Christianity is the belief that the second person of the Trinity, also known as God the Son or the Logos (Word), “became flesh” by being conceived in the womb of a woman, the Virgin Mary, also known as the Theotokos (God-bearer). The incarnation, then, is the God-Man ‘Jesus Christ’.

If Aslan really “thinks” Christianity teaches reincarnation, why did he neglect to mention this throughout his entire book? The word “incarnation” is clearly more consistent with his work. Still, could it be that Aslan is lying about the typo?

In fact, Reza Aslan was clearly vindicated when DL Magazine has posted a correction [emphasis mine]:

CORRECTION 12/29/13: The original published version of this interview stated that Reza Aslan rejected “reincarnation”. That is incorrect; he states that he rejected “incarnation”. DL Magazine regrets the transcribing error. Thank you.

Spencer also tried to take a swipe at Aslan’s best-selling book, Zealot, The Life and Times of Jesus of Nazareth. Rather than challenging the content, he suggested the book was ghost written because:

…so obvious is Aslan’s abysmal ignorance of the subject matter and only dim awareness of how to write a grammatically correct sentence.

Is that the best he can do? Instead of offering a substantive critique of Aslan’s work, Spencer has now devoted two articles to huffing and puffing about something spectacularly petty.

At the time of this writing, Spencer has not updated his article. If the past is any indication, he will not post a correction. He will let his false accusation stand, and when the mood strikes, he will no doubt challenge Aslan again–and invite another round of ridicule.

Robert Spencer: “I have exactly the same credentials as [Reza] Aslan”; Oh, Really?