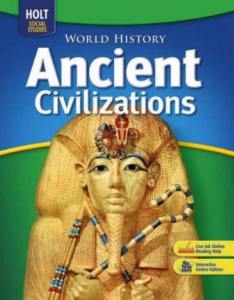 In December we covered the crusade by Islamophobes against the study of history in the South, one organization, Brigitte Gabriel‘s ACT! For America isn’t giving up.

The following story in “All Alabama” by Evan Belanger links to our coverage of Gabriel and her group though he writes she is critiqued for being “anti-Islam” which is incorrect. As the link to our article shows we expose her for her racist views on Arabs, “they have no soul,” “are barbarians,” and the fact that she is a “radical and hateful Islamophobe.”

By Evan Belanger (All Alabama)

BIRMINGHAM, Alabama — The Alabama State Board of Education dismissed last week allegations from conservative groups that 11 textbooks on the state’s new list for social studies material are pro-Islamic and diminish Christianity.

Now, the founder of one of those groups says he’ll continue to fighting to keep the textbooks out of Alabama classrooms, encouraging local school boards to reject textbooks.

“It’s not anti-Islamic as such. It’s the indoctrination and propaganda and false information about Islam — primarily its history on how their cultures interacted with others,” said Larry Houck, founder of the Birmingham chapter of ACT! for America.

The conservative organization, founded by journalist Brigitte Gabriel, calls for increased protection of freedom and security in America. However, it has been criticized as anti-Islamic based on Gabriel’s views that the religion promotes terrorism and hinders self-expression, self-improvement and empowerment.

In reviews provided to the state board last month, ACT! for America and the longtime conservative interest group Eagle Forum of Alabama, alleged authors had gone out of their way to present Islam in a positive the light.

They also called Islam a violent and intolerant religion and complained the books dedicated more space to the religion as compared to Christianity. Other allegations included that certain statements in the books were offensive to Christians.

The objections caused the state board to delay consideration of the new list during its meeting in December.

Houck, who began researching Islam after the Sept. 11, 2001 terror attacks, said his fight is not against Islam, but against its false portrayal in textbooks.

“These kids are getting a false picture of Islam and its history, and they’re going to grow up with wrong information,” Houck said following last week’s vote.

“One book said they mixed in a rich cultural stew. Well, they didn’t. They obliterated the cultures they defeated. I’m hugely disappointed.”

For the first time since the debate started, the school board heard last week from a member of Alabama’s Muslim community.

“I think we should focus on education, not make an issue about religion,” said Aya Zaied, a Montgomery resident and student at the University of Alabama at Birmingham.

“I feel like this opens the door to hate,” she said of the debate. “We should be teaching tolerance and diversity.”

Houck vowed to continue fighting the books’ use in Alabama classrooms, alleging they are part of a “civilizational jihad against America.”

“We’re going to keep at it,” he said. “To the best of our ability, we likely will go to the individual school boards and districts.”

Last week’s vote to include the 11 books in the more than 500 social studies books on the list drew dissenting votes from school board members Stephanie Bell of Montgomery and Betty Peters of Kinsey.

“It’s not that I have any problem whatsoever with comparative religion. …” Peters said. “I do have a problem when a textbook company presents in once section as fact and in the other as ‘it is said.’”

Bell argued the books did not need to be included because there were still plenty of books on the list that were not being questioned from which local school boards could choose.

“I think the point here is trying to ensure that we have quality and that we have good solid textbooks in the classroom,” she said.

“I think anyone in psychiatry will know that so many of our problems are a result of what children actually see and hear. Some things don’t need to be shared to the extent that they are shared at an age where it is inappropriate.”

State Superintendent of Education Tommy Bice, who recommended the state board keep the books on the list, said he reviewed the groups’ concerns and decided to trust the committee tasked with reviewing Alabama’s textbooks for quality and bias.

Local schools are not required to use textbooks from the approved list, but they will not receive state textbook funding for books not on the list.