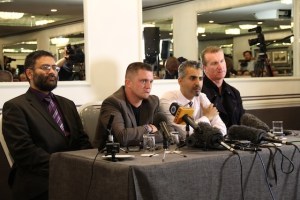 Bob Pitt of IslamophobiaWatch has flagged a supportive tweet by Kevin Carroll for the violent and racist Burmese Buddhist monk, Ashin Warathu who is wreaking havoc through his 969 movement in Myanmar.

Carroll, along with Tommy Robinson are the same men that Maajid Nawaz and Quilliam Foundation told us have been rehabilitated and are no longer “Islamophobes.”

Since Stephen Lennon (“Tommy Robinson”) and his cousin Kevin Carroll appeared at a Quilliam press conference last year to announce their resignation from the leadership of the English Defence League, opponents of racism and fascism have concentrated on exposing the fraudulent character of Lennon’s supposed break with extremism.

With “Tommy” now safely locked up, beginning an 18-month prison sentence for his part in a £162,000 mortgage fraud, it is perhaps time to turn our attention to Carroll – who, just like Lennon, was presented by Quilliam as a man that had renounced his far-right, anti-Muslim past.

For anyone who is still stupid or blinkered enough to buy Quilliam’s lies, here from earlier today is Carroll tweeting his support for Ashin Wirathu, the Buddhist monk who has inspired the ongoing genocidal campaign against the Rohingya Muslim community in Myanmar. (The admiration is mutual – last year Wirathu told the Times that his anti-Muslim movement “would like to be like the EDL”.)

Postscript:  It’s worth noting that Carroll’s backing for the anti-Rohingya campaign is nothing new. Here he is in November, retweeting inflammatory propaganda from an anti-Muslim racist posting as “Myanmar Buddhist”: