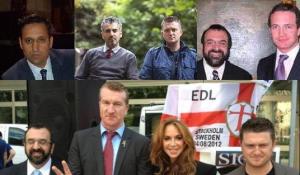 As previously discussed on Loonwatch, the Quilliam Foundation’s leadership have been exposed as directly involved with Douglas Murray’s neocon “Henry Jackson Society” think-tank. It turns out that senior figures from these two organisations have been working closely with each other for an extended period of time. As also heavily documented in the article, Douglas Murray himself has a considerable history of virulently anti-Muslim views (especially when the audience is not the British mainstream media), and he has also made further statements complaining about “white Britons abolishing themselves”. Like English Defence League ex-leader Stephen Yaxley-Lennon (aka “Tommy Robinson”), Murray also has an extensive history of very close involvement with the anti-Muslim propagandist Rev. Deacon Robert Spencer, a high-profile foreign extremist whom the British Government’s Home Office has banned from entering the United Kingdom. Murray has recently become increasingly open about his support for Yaxley-Lennon too.

After the article was published, Quilliam co-founder/Liberal Democrats parliamentary candidate Maajid Nawaz and Quilliam’s “head of research” Ghaffar Hussain (who, it turns out, merely works for them in a freelance capacity and is actually a formal member of the Henry Jackson Society’s professional staff) both engaged in a lengthy Twitter argument with one of Loonwatch‘s editors on 30 December 2013. Hussain is clearly furious about being publicly exposed as working for Douglas Murray’s organisation. Nawaz’s own behaviour was a combination of bizarre, immature sneering, and blatant “psychological projection”. For example, see here and here. There are numerous other examples visible if you scroll down to 30 December 2013 on Loonwatch’s Twitter account. Nawaz also engaged in his usual ridiculous tactic against his critics, labelling Loonwatch’s editors and writers as “Far-Left”, “Islamists”, and “Islamist apologists”.

Most striking of all was the fact that both Maajid Nawaz and Ghaffar Hussain completely avoided the main premise of the article, namely the fact that Quilliam’s leadership are directly involved with the Robert Spencer-allied Douglas Murray and the Henry Jackson Society. Nawaz and Hussain were unable to refute any of information highlighted in the article, including the details of Stephen Yaxley-Lennon’s statements admitting the real reasons for his involvement with Quilliam.

Maajid Nawaz was recently at the center of a major controversy in the UK. I am not going to comment in detail on this issue; like Loonwatch’s editors, I think the subject is a distraction from the much bigger problems with Nawaz and Quilliam. However, it is worth noting Nawaz’s recent online statements to members of the British general public who had criticised his actions. Bear in mind that the following remarks are from someone who presents himself as a leading wannabe “reformer” of one of the world’s major religions:

Still writing on his Twitter account, Nawaz has subsequently taken to “piously” quoting various verses from the Quran.

Furthermore, although Quilliam’s leadership claim to be staunch believers in the concept of “freedom of speech”, and have recently been referring to this concept when justifying their own actions, it turns out that they actually have a history of threatening lawsuits against opponents who have used their own freedom of speech to criticise Quilliam.

Having lapped up the publicity from brokering his exit from the EDL, anti-extremism think tank Quilliam seem to be getting cold feet about Robinson after they were wrongly linked to the tour. A spokesman was at pains to deny they were paying him for anything and told Scrapbook:

“Tommy Robinson isn’t doing anything for Quilliam. He’s not a member of staff here … He’s his own man.”

“We do outreach work. Tommy Robinson does other things and he’s not working here.”

Quilliam claim that his involvement with them has so far been limited to “mentoring” — including attending classes on Islam and “theological reform”.

However, as previously discussed on Loonwatch, Stephen Yaxley-Lennon himself has been making some very different statements to various international outlets (especially a Far-Right source). He has even repeatedly confirmed his continuing support for Robert Spencer. In fact, Yaxley-Lennon has admitted the real reasons for his involvement with Quilliam, including the associated long-term gameplan. Key quotes:

[Stephen Yaxley-Lennon/”Tommy Robinson]: “The fact is that I thought it would be a good idea to appear together with Quilliam in order to gain credibility. It is good to sit together with them and say: “We don’t hate Muslims but we have to solve our problems.”

– When I met the people from Quilliam, I realized that they could help me with a lot of things. I’m just a working class bloke from Luton. I don’t know how to set up and run a think tank and get donations. I asked if they would teach me and they said yes. They said: “You may have whatever opinions you like but you will get more out of expressing them in a more political way.”

[Dispatch International]: “Could one say that you are using them and they are using you?”

[Stephen Yaxley-Lennon/”Tommy Robinson”]: “Look at what has happened since I left the EDL. Look at my new platform.”

“What I’m saying now is the same as I’ve been saying for four and a half years.”

“There is a massive gap between what I can say and what the politicians can say. When I now sit with politicians in a TV studio, they may disagree with me but when the cameras are shut, they give me the thumbs up. So do many journalists who used to tear into me.”

“Actually, my stance [towards Islam and Muslims] hasn’t dampened or softened at all – if people listen to what I say.”

When have I slagged EDL off? Remember what I stood for? It’s what I stand for! Like I’ve forgot ! I live it every day.

This article includes nearly two dozen examples of Yaxley-Lennon’s extremely bigoted previous statements during his time with the EDL, including multiple examples clearly indicating that (a) Yaxley-Lennon’s agenda is actually racially-motivated, and (b) he is using the terms “Islam/Islamic” and “Muslim” as euphemisms for “South Asian”.

As highlighted by The Guardian in October 2013, there has been speculation that Quilliam’s actions are actually motivated by an agenda to secure new funding. Another Guardian article from October 2013 quotes Maajid Nawaz himself:

Nawaz said he would work to introduce Robinson to his own contacts in government and the Home Office in an attempt to procure government funding.

An extensive amount of material newly released via FOI procedures has exposed the Quilliam leadership’s recent discussions with one of the British Government’s major departments.

Amongst other things, it turns out that Maajid Nawaz has been sending senior government officials begging letters requesting funding sourced from British taxpayers, in order to (a) finance Quilliam’s targeting of EDL members, and (b) especially to pay Stephen Yaxley-Lennon himself. Key extracts:

Quilliam has broken the news to the world that Quilliam has managed to facilitate the defection of the founder and leader of the EDL, Tommy Robinson (real name Stephen Yaxley), and his right-hand man and co-founder Kevin Carroll from their movement. In other words, the UK’s largest right-wing street movement – the EDL – is being decapitated. By tomorrow, this will be major and probably global news.

Both men are keen to be guided by Quilliam in their transition away from this movement and towards a better way forward. In this case, Quilliam will act as a conduit.

We at Quilliam are immensely proud to have been able to help bring this transition about. We have offered to support these defections and are currently seeking to raise funds for the costs associated with supporting Tommy Robinson while he transitions away from his current financial dependency on the EDL, with a long term view of helping him reconsider his strategy and tactics under our long-term guidance.

Due to the nature of this unprecedented news, we have been coordinating this transition and all costs associated to it without a budget. Please let us know if you can urgently help us with a direct contribution so that we may fund Stephen’s transition and cut off his previous dependency on EDL donors.

Finally, I thank you from the bottom of my heart for your continued support for Quilliam as we make history in this way. Today we hope to make you proud!

Concerning our below announcement, here’s a news analysis that I believe sums it up well: http://blogs.telegraph.co.uk/news/danielhannan/100241068/the-symbiotic-relationship- between-the-edl-and-the-islamo-nutters-not-forgetting-the-anti-fascists/

I am keen to turning this into a project in which Tommy and I can start to reach out to his former members and pull them into the mainstream. Saturday’s Guardian will carry an apology by Tommy for the hurt he’s caused Muslims. Can we meet to discuss? Currently, this we have no funding in place to engage in this vital work.

It is worth bearing in mind the following fact: British Government policy is that public money must not be used to fund extremist individuals and organisations.

Despite Maajid Nawaz’s claims in the first email quoted above, in reality Kevin Carroll has continued pushing virulently anti-Muslim views online. There have recently been two particularly glaring incidents, one of which included the endorsement of mass-murder. See here and here. As documented here, Kevin Carroll has also been openly promoting Far-Right conspiracy theories.

Maajid Nawaz and the rest of Quilliam’s leadership have (publicly) still said absolutely nothing to condemn Kevin Carroll’s latest actions, let alone preventing them in the first place.

A Guardian article from 2010 discussed the fact that Quilliam drew up a secret list of individuals and groups they claimed were “Islamist extremists”, including one of Scotland Yard’s own counter-terrorism units, and sent this report directly to the director-general of the British Government’s Office for Security and Counter-Terrorism (OSCT), a directorate of the Home Office. Quilliam’s report was rejected and condemned by a range of senior figures, including the co-founder of the aforementioned counter-terrorism unit along with the Chairman of the Parliament’s Home Affairs Select Committee.

The aforementioned declassified emails includes the following statements by Maajid Nawaz, in an email dated 11 June 2013, inviting “Secretary of State” [sic; his full title is actually “Secretary of State for Communities and Local Government”] Eric Pickles to a Quilliam anniversary event:

The Prime Minister has indeed been listening to us. Only a week before the Woolwich murder he called upon me to visit him and the Foreign Secretary at Chequers in order to advise officials on what our governments policy should be towards new Islamist regimes in the Middle-East.

It is presently unclear if the British Government is aware of the full scale of Quilliam’s actions and affiliations, particularly the incriminating facts highlighted in this article and the preceding associated articles. Considering the Quilliam leadership’s demonstrable history of gross dishonesty, it would therefore be appropriate to give Prime Minister David Cameron, Foreign Secretary William Hague, and associated senior politicians and government officials the benefit of the doubt.