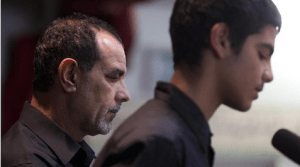 In this March 27, 2012 file photo, Kassim Alhimidi, left, looks on alongside his son, Mohammed Alhimidi, during a memorial for his slain wife.

During a pretrial motion hearing March 25, El Cajon police detective Darren Forster made a startling admission. He testified that he doctored a photograph so it would appear that Kassim Alhimidi was nearby when his 32-year-old wife, Shaima Alawadi, was brutally murdered in their home on March 21 of 2012.

Police admitted that they drove the suspect’s red van to the scene and staged a photo, altering the date stamp. The motive for fabricating evidence, according to Forster, was to coerce a confession from Alhimidi, who has consistently maintained his innocence.

Police Chief Ed Aceves later said deception is commonly used by police and is allowed if officers “follow the rules within the constitution and case law.” He did not want to comment on the specifics of the Alawadi murder case.

“People don’t confess to things they didn’t do in most cases,” Chief Aceves said, but conceded there are exceptions if people are “worn down from hours and hours of questioning.”

Aceves said ultimately is it up to the courts to determine whether or not police have gone too far.

What’s particularly interesting about this new development is that last July, the judge in the case said street-camera footage indicating Alhimidi might have driven a short distance from his home the morning of the murder and parked his car was for him “the most persuasive evidence” in the case. Referring to Alhimidi’s claim he had gone for a drive to relax at the time of the murder, San Diego Superior Court Judge Lantz Lewis said, “It appears to be a lie,” and ordered Alhimidi to stand trial for his wife’s murder.

Justin Brooks, a law professor and head of the California Innocent Project in San Diego said that while he objects to police lying to obtain confessions, courts have upheld the practice. However, it is illegal to present falsified evidence in court. Yet it appears the doctored photograph placing Alhimid’s van near the scene was submitted to the court and influenced the judge’s decision.

It is unclear what impact this new revelation will have on the case. Don’t expect to read news of this latest revelation on anti-Muslim hate blogs, whose agenda would be best served by Alhimidi’s conviction.

First thought to be a hate crime against the family of Iraqi Muslim immigrants, the story generated an outpouring of support from around the world. However, rumors a hate crime was staged to cover up the true nature of the murder began to circulate almost immediately, and become more widespread as police began to zero in on Alawadi’s husband as the prime suspect.

Professional outrage peddlers Pamela Geller and Robert Spencer immediately seized the opportunity to portray the initial outpouring of sympathy as naive, politically correct capitulation. Surmising almost from the start that the case was really an “honor killing,” anti-Muslim bigots could hardly contain their glee when Kassim Alhimidi was arrested. Treating the arrest as the equivalent of a conviction, they began gloating, thrilled they could exploit Shaima Alawadi’s brutal murder to vilify Islam and the Muslim community.

In this country, a suspect is innocent until proven guilty in a court of law. In concert with David Yerushalmi, Pamela Geller has devoted herself in the past to a campaign ostensibly aimed at protecting the American legal system from “creeping sharia.” Yet she didn’t hesitate to discard much-vaunted bedrock legal principles to convict Alhimidi right from the start. She spoke emphatically of the murder as an “honor killing” perpetrated by Alawadi’s husband and “rooted in Islamic teachings and culture.”

Even if Alhimidi is ultimately convicted of Alawadi’s murder, what is the basis for assuming the crime was motivated by some notion of family honor? It seems for Geller, the honor motive can simply be assumed whenever the perpetrator is a Muslim.

Geller’s claim that honor killing is rooted in “Islamic teachings” is false. She and Robert Spencer have in the past fabricated “evidence” to falsely implicate Islamic doctrine as the culprit behind honor killings. We have repeatedly debunked their “talking points,” in articles here, here, and here.

Mona Eltahawy and Raquel Saraswati* (featured in the Islamophobic Clarion Fund’s upcoming movie, “Honor Diaries“) echoed anti-Muslim bigots in this exchange regarding the murder on Twitter.

There are developments in the case that cast doubt on both the original “hate crime” narrative, and the subsequent “honor killing” counter narrative. Months earlier, Enrique Cervantes witnessed and documented an interesting series of events that may be related. In a written essay he described a young couple having sex in the backseat of a car in front of his home in broad daylight the previous November.

“I could see bodies in it, rocking around, the car shaking back and forth, and it’s not even one o’clock,” Cervantes later said of the scene in an essay for the San Diego City Beat.

The couple Cervantes described happened to be Shaima Alawadi’s 17-year-old Fatima Alhimidi and her 21-year-old boyfriend, Rawnaq Yacub. Reports suggest Yacub is of Christian Iraqi origin, and that Fatima may have been struggling with her parents to avoid an arranged marriage to another man. According to Cervantes, the couple stayed at the scene until police arrived, and the girl’s mother came to take her away.

Further details of family strife, including the possibility Shaima Alawadi may have been contemplating divorce, have emerged since the start of the investigation, fueling further speculation about possible motives for the murder. Details were made public after a police affidavit was leaked to the New York Times.

Records show a neighbor spotted a suspect fleeing the area at 10:30 a.m., about 45 minutes before the victim’s daughter, Fatima Alhimidi, called 911 emergency service to report the attack. The suspect was described as a “…dark skinned male, in late teens or early 20’s, 5 feet 7 inches in height, 150 lbs., skinny build, with dark blue or black hoodie, carrying a brown donut shaped cardboard box run west from the area of the victims house…”

The affidavit also refers to a text message allegedly intercepted by police in possession of  Fatima Alhimidi’s mobile phone during her questioning. The message read, “The detective will find out tell them [can’t] talk.” What’s interesting is that affidavit does not specify the phone number or name of the person who sent the text, referring only to a “yet unknown suspect.”

Was the text message sent by her father, Kassim Alhimidi, who is now suspected of the murder? The wording of the affidavit is vague about the name and telephone number of the sender. However, Alhindi’s defense attorney, Richard Berkon Jr., has pointed out his client does not write or speak English.

For that matter, how could Alhimidi have written the note found at the scene of the murder, which read “Go back to your country, you terrorist.” If the crime was staged by Kassim Alhimidi to look like a hate crime, did he have an English-speaking accomplice pen the note for him in English?

Despite widespread speculation, we still do not know who murdered Shaima Alawadi. Defense Attorney Berkon also noted there is no forensic evidence linking his client to the crime. No blood or glass was found on Alhimidi’s body or clothing, or in his car. Alhimidi has cooperated throughout the investigation, and had voluntarily returned to the US after burying his wife in Iraq, expressly stating he had nothing to hide.

“It doesn’t make sense, your honor,” Berkon told Lewis. “The real killer is still out there.”

Opening arguments in Alhimidi’s case are scheduled to begin on April 1.

*Note: Raquel Saraswati denies any close involvement with the Clarion Fund but her participation with the group, giving them a platform, is extremely troubling and problematic. Clarion Fund and Rabbi Raphael Shore have a long history of extreme Islamophobia, having produced “Obsession,” “Third Jihad,” and the warmongering “Iranium.” –Emperor