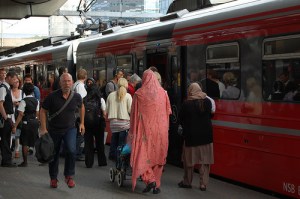 The survey was carried out between August 2010 and May 2012 by TNS Gallup and had some interesting results that in some ways are consistent with views across Europe.

The survey is described by the authors as the “first extensive population survey” of its kind. It largely focused on Norwegian views towards Jews and antisemitism but also covered attitudes towards other minorities, including Muslims.

As you can see from the summary of the survey, stereotypical and antisemitic views of Jews do exist in Norwegian society. The results also show that there is greater social distance to other minorities than to Jews.

Norwegian society is most negative towards contact with Muslims, Somalis and Romani. Those with the strongest antisemitic views were also strongly Islamophobic, xenophobic and skeptical of immigrants.

The results show that stereotypical views of Jews exist in Norwegian society. All in all, 12.5 per cent of the population can be considered as being significantly prejudiced against Jews. When compared to the rest of Europe, the prevalence of antisemitic views in Norway is relatively small and on a par with the UK, the Netherlands, Denmark and Sweden. Certain antisemitic notions are, however, more widespread in Norway. For example, as many as 19 per cent of respondents agree with the statement that “World Jewry is working behind the scenes to promote Jewish interests” and 26 per cent believe it is correct that “Jews consider themselves to be better than others”.

Antisemitism can also be gauged by analysing negative feelings and social distance. The survey reveals that 9.7 per cent of respondents feel antipathy towards Jews, while 8 per cent of the population do not want Jews among their neighbours or circle of friends. Overall, the three dimensions used in measuring negative attitudes towards Jews are somewhat less prevalent among women, younger people and those with higher education than they were among men, older people and those with lower education.

Respondents were also questioned about their attitudes towards immigrants and people of other nationalities and religions. The results show that the social distance to most other groups is greater than that to Jews. The Norwegian population is most negative towards contact with Muslims, Somalis and Romani (gypsies). Those with the strongest antisemitic attitudes also most strongly reject other groups. This is particularly evident in terms of attitudes towards Muslims, Somalis and Romani. Seventy-six per cent of those who distance themselves socially from Jews display similar attitudes towards Muslims. Antisemitic attitudes are also more common among those respondents who are highly sceptical of immigrants. Such tendencies have been observed in other European countries as well.