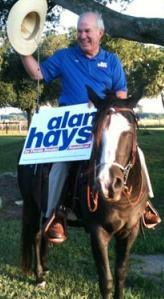 Will Florida join Arizona, Kansas, Louisiana, North Carolina, South Dakota and Tennessee in banning the use of foreign law? Alan Hays has pushed various versions but finally the senate has approved his polished proposal (SB-386). When will it be up for debate in the House is still not clear.

When you were a child, did your parents have you vaccinated against different diseases? That was a preemptive gesture on their part for which I would hope you’re very thankful. And this is very similar to that. Your mom and dad would not want you to get sick from one of those dreadful diseases, and I don’t want any American to be in a Florida courtroom and have their constitutional rights violated by any foreign law. That’s it. It’s not that complicated.

TALLAHASSEE — Foreign laws would be banned in Florida courts for certain family-related cases, under a bill the Senate sent to the House on Monday.

The Senate voted 24-14 to approve the proposal (SB 386) by Umatilla Republican Alan Hays, who has pushed various versions of the measure the past few years.

The bill would restrict courts and arbitration tribunals from applying foreign law and legal codes to matters of divorce, alimony, division of marital assets, child support and child custody.

The proposal is more defined than last year’s effort, which got House support but failed to advance in the Senate.

The House companion (HB 903) has reached the floor but has yet to be scheduled for debate.

Hays said the bill will do nothing to impede international trade, a prior concern of business groups, and won’t cast a negative message upon anyone from another country.

But the bill has been criticized as anti-Muslim and targeted at Sharia religious law followed in some Islamic countries.

Sen. Eleanor Sobel, D-Hollywood, said she opposed the bill because foreign laws have never been implemented in Florida courts or any other state.

Sen. Geraldine Thompson, D-Orlando, added that the bill appears neutral but the perception is that it targets certain religious groups in Florida.

“There are individuals who feel this bill targets them,” Thompson said. “It has caused unnecessary polarization.”

The Florida chapter of the Council on American-Islamic Relations sent letters to Republican lawmakers on April 7 asking them to reject the bill they claim is intended to “marginalize” American Muslim and other minority communities.

The bill doesn’t mention Sharia or any other specific foreign law, which Senate staff believes strengthens the measure against legal challenges.

“As religion is not mentioned at all, the court will deem it facially neutral,” the staff review said. “A court will then apply the Lemon test (a legal test), and likely find both a secular government purpose and that the law does not facilitate excessive governmental entanglement with religion. Because of this, a court will likely uphold the law from a First Amendment challenge.”