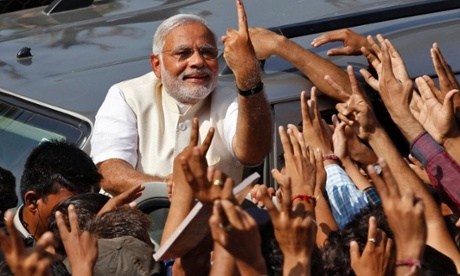 As expected, Narendra Modi, and the BJP have won elections in India.

The New Face of India

By Pankaj Mishra (The Guardian)

In A Suitable Boy, Vikram Seth writes with affection of a placid India‘s first general election in 1951, and the egalitarian spirit it momentarily bestowed on an electorate deeply riven by class and caste: “the great washed and unwashed public, sceptical and gullible”, but all “endowed with universal adult suffrage”. India’s 16th general election this month, held against a background of economic jolts and titanic corruption scandals, and tainted by the nastiest campaign yet, announces a new turbulent phase for the country – arguably, the most sinister since its independence from British rule in 1947. Back then, it would have been inconceivable that a figure such as Narendra Modi, the Hindu nationalist chief minister of Gujarat accused, along with his closest aides, of complicity in crimes ranging from an anti-Muslim pogrom in his state in 2002 to extrajudicial killings, and barred from entering the US, may occupy India’s highest political office.

Modi is a lifelong member of the Rashtriya Swayamsevak Sangh (RSS), a paramilitary Hindu nationalist organisation inspired by the fascist movements of Europe, whose founder’s belief that Nazi Germany had manifested “race pride at its highest” by purging the Jews is by no means unexceptional among the votaries of Hindutva, or “Hinduness”. In 1948, a former member of the RSS murdered Gandhi for being too soft on Muslims. The outfit, traditionally dominated by upper-caste Hindus, has led many vicious assaults on minorities. A notorious executioner of dozens of Muslims in Gujarat in 2002 crowed that he had slashed open with his sword the womb of a heavily pregnant woman and extracted her foetus. Modi himself described the relief camps housing tens of thousands of displaced Muslims as “child-breeding centres”.

Such rhetoric has helped Modi sweep one election after another in Gujarat. A senior American diplomat described him, in cables disclosed by WikiLeaks, as an “insular, distrustful person” who “reigns by fear and intimidation”; his neo-Hindu devotees on Facebook and Twitter continue to render the air mephitic with hate and malice, populating the paranoid world of both have-nots and haves with fresh enemies – “terrorists”, “jihadis”, “Pakistani agents”, “pseudo-secularists”, “sickulars”, “socialists” and “commies”. Modi’s own electoral strategy as prime ministerial candidate, however, has been more polished, despite his appeals, both dog-whistled and overt, to Hindu solidarity against menacing aliens and outsiders, such as the Italian-born leader of the Congress party, Sonia Gandhi, Bangladeshi “infiltrators” and those who eat the holy cow.

Modi exhorts his largely young supporters – more than two-thirds of India’s population is under the age of 35 – to join a revolution that will destroy the corrupt old political order and uproot its moral and ideological foundations while buttressing the essential framework, the market economy, of a glorious New India. In an apparently ungovernable country, where many revere the author of Mein Kampf for his tremendous will to power and organisation, he has shrewdly deployed the idioms of management, national security and civilisational glory.

Boasting of his 56-inch chest, Modi has replaced Mahatma Gandhi, the icon of non-violence, with Vivekananda, the 19th-century Hindu revivalist who was obsessed with making Indians a “manly” nation. Vivekananda’s garlanded statue or portrait is as ubiquitous in Modi’s public appearances as his dandyish pastel waistcoats. But Modi is never less convincing than when he presents himself as a humble tea-vendor, the son-of-the-soil challenger to the Congress’s haughty dynasts. His record as chief minister is predominantly distinguished by the transfer – through privatisation or outright gifts – of national resources to the country’s biggest corporations. His closest allies – India’s biggest businessmen – have accordingly enlisted their mainstream media outlets into the cult of Modi as decisive administrator; dissenting journalists have been removed or silenced. 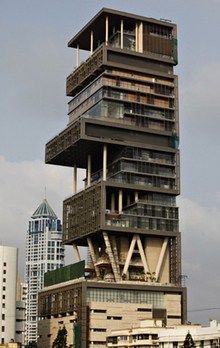 Not long after India’s first full-scale pogrom in 2002, leading corporate bosses, ranging from the suaveRatan Tata to Mukesh Ambani, the owner of a 27-storey residence, began to pave Modi’s ascent to respectability and power. Thestars of Bollywood fell (literally) at the feet of Modi. In recent months, liberal-minded columnists and journalists have joined their logrolling rightwing compatriots in certifying Modi as a “moderate” developmentalist. The Columbia University economist Jagdish Bhagwati, who insists that he intellectually fathered India’s economic reforms in 1991, andGurcharan Das, author of India Unbound, have volunteered passionate exonerations of the man they consider India’s saviour.

Bhagwati, once a fervent supporter of outgoing prime minister Manmohan Singh, has even publicly applied for an advisory position with Modi’s government. It may be because the nearly double-digit economic growth of recent years that Ivy League economists like him – India’s own version of Chile’s Chicago Boys and Russia’s Harvard Boys – instigated and championed turns out to have been based primarily on extraction of natural resources, cheap labour and foreign capital inflows rather than high productivity and innovation, or indeed the brick-and-mortar ventures that fuelled China’s rise as a manufacturing powerhouse. “The bulk of India’s aggregate growth,” the World Bank’s chief economist Kaushik Basu warns, “is occurring through a disproportionate rise in the incomes at the upper end of the income ladder.” Thus, it has left largely undisturbed the country’s shameful ratios – 43% of all Indian children below the age of five are undernourished, and 48% stunted; nearly half of Indian women of childbearing age are anaemic, and more than half of all Indians still defecate in the open.

Absurdly uneven and jobless economic growth has led to what Amartya Sen and Jean Dreze call “islands of California in a sea of sub-Saharan Africa”. The failure to generate stable employment – 1m new jobs are required every month – for an increasingly urban and atomised population, or to allay the severe inequalities of opportunity as well as income, created, well before the recent economic setbacks, a large simmering reservoir of rage and frustration. Many Indians, neglected by the state, which spends less proportionately on health and education than Malawi, and spurned by private industry, which prefers cheap contract labour, invest their hopes in notions of free enterprise and individual initiative. However, old and new hierarchies of class, caste and education restrict most of them to the ranks of the unwashed. As the Wall Street Journal admitted, India is not “overflowing with Horatio Alger stories”. Balram Halwai, the entrepreneur from rural India in Aravind Adiga’s Man Booker-winning novel The White Tiger, who finds in murder and theft the quickest route to business success and self-confidence in the metropolis, and Mumbai’s social-Darwinist slum-dwellers in Katherine Boo’s Behind the Beautiful Forevers point to an intensified dialectic in India today: cruel exclusion and even more brutal self-empowerment.