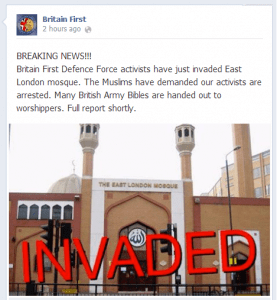 They left pretty quickly, after a local Community Support Officer spotted their car on zig-zag traffic lines, and run a red light as they made their “getaway”.

Britain First’s previous visit, as part of their misnamed ‘Christian Patrol’, showed them bravely swigging lager and unfurling a banner on the street outside … before again running off quickly.

Of course, members of the public are welcome to attend the mosque and, with a booking, take a tour of the facilities (perhaps Britain First had trouble writing down the number).

Britain First is, of course, a tiny hate group whose members were booted out of the far-right British National Party (BNP). The mother of murdered soldier Lee Rigby has recently asked Britain First leader Paul Golding (a former BNP councillor in Kent and the party’s ex-publicity officer) to stop using her son’s name – something Golding has pointedly refused to do – claiming she is, understandably, ‘heartbroken’. Golding also had to admit to Andrew Neil on the BBC’s Daily Politics show that money his organisation claimed to be collecting for British soldiers was, in fact, going to the party itself.

The party has recently boasted of guarding UKIP venues, though as anti-fascist groups have noted, its leader Jim Dowson has strong links to Northern Ireland, where he has been involved in the ‘flag protests’ in Belfast, as well as having a long history in an anti-abortion extremism.

You can see Britain First leader Paul Golding under interview from Andrew Neil on the BBC Daily Politics show here.

HOPE not hate’s background research on Britain First can be read here.