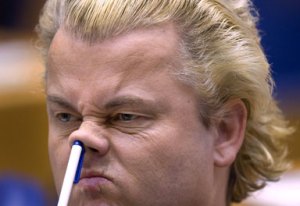 Geert Wilders came fourth in European elections in the Netherlands on Thursday night, confounding predictions that he would lead a populist and far-Right backlash against the European Union across the continent.

Previous opinion polls had put Mr Wilders in the lead but there was widespread controversy over his alliance with the France’s Front National and the exit polls suggested that his share of the vote fell, compared with 2009, by 4.8 percentage points.

The result is a major blow to Mr Wilders who will lose two seats in the European Parliament with his MEPs now reduced to three out a total of 26 Dutch representatives.

After delaying a downbeat post-election party in a tiny sports bar in the suburbs of Scheveningen, a Dutch seaside town on the outskirts of The Hague, Mr Wilders insisted he would fight on “for national sovereignty, for less immigration, for less Brussels”.

“Our people stayed at home. We’ll carry on fighting. We’ll find partners who share our views against the EU across Europe,” he said.

His supporters, wearing customised “Wilders Akbar” football shirts – a provocative play on the Islam chant “Allahu Akbar”, or “God is Great” – had arrived in celebratory mood but hissed as the first exit polls were released by Dutch state broadcaster.