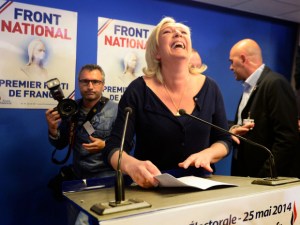 Not an untypical reaction in the looniverse to the rise of fascists and Neo-Nazis in Europe has been the rantings of BareNakedIslam, who can always be counted on to provide the unflitered, demented thoughts of racists and Islamophobes worldwide.

Today, what it means to be “European” for many Europeans is anti-Muslim and xenophobic, but then again for those who’ve been following Loonwatch the results of the elections aren’t surprising.

‘This is an earthquake’: The far-right rises as EU elections signal a massive shift across Europe

So who were the big winners and losers?

FRANCE In France, the anti-EU, far-right National Front party led by Marine Le Pen got one in four votes, the best showing by any of the country’s parties. The Socialists were holding emergency meetings to discuss the results. The breakthrough dealt a further blow to President Francois Hollande, the least popular leader in France’s modern history. Proclaiming “politics of the French, for the French, with the French,” Ms. Le Pen said the election was a “humiliation” for Mr. Hollande. 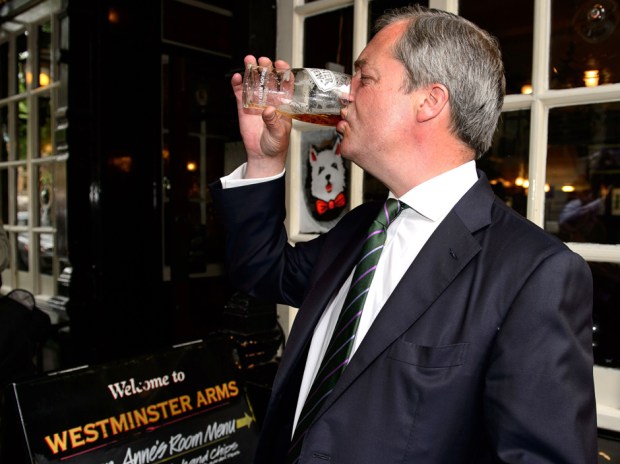 AFP PHOTO / Leon NealUK Independence Party leader Nigel Farage celebrates at a pub in central London on May 26, 2014. His UK Independence Party
(UKIP) topped the poll inBRITAIN With most of the seats declared in Britain, Nigel Farage’s UK Independence Party (UKIP) had 27.5% of the vote, the main opposition Labour Party 25%, the Conservatives 24%. Prime Minister David Cameron has ruled out a coalition with UKIP. Mr. Farage said it was the most stunning election upset in 100 years.GREECE Voters in Greece, handed first place and six seats to the anti-establishment Syriza party that campaigned against fiscal austerity policies. Prime Minister Antonis Samaras’s New Democracy party came second but the Nationalist Golden Dawn party, whose leader and five other lawmakers are in prison pending trial on charges of running a criminal organization, jumped to third place, with 9.4 percent of the vote. The result gives them three seats. 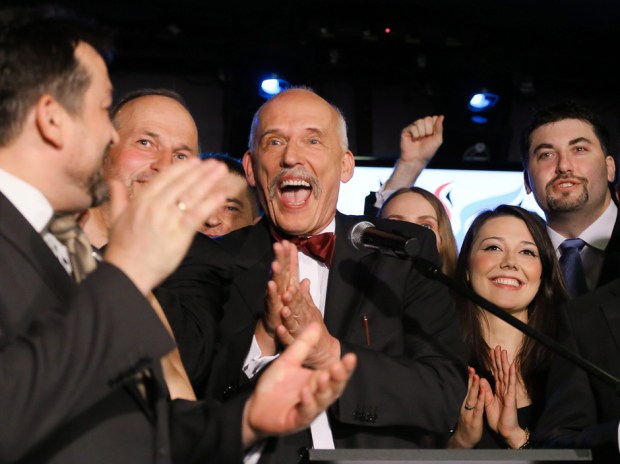 POLAND In Poland, marginal anti-EU politician Janusz Korwin-Mikke was elected to the parliament after declaring that it corrupts politicians and should be turned into a brothel.

SPAIN Podemos, a new movement that grew out of street demonstrations against politicians and banks, won five seats.

HOLLAND Initial exit polls from the Netherlands showed a setback for Geert Wilders’s anti-EU Freedom Party, which may have come in fourth after targeting a first-place finish. 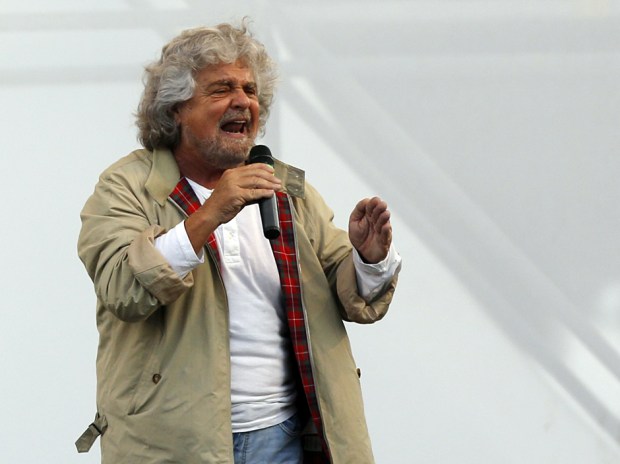 AP Photo / Gregorio BorgiaBeppe Grillo, leader of the Five Stars Movement, delivers a speech during a campaign rally in Rome on Friday, May 23, 2014, preceding the EU Parliament elections on May 25.

Germany Angela Merkel’s conservatives were the strongest force in Germany winning with 36% of the vote, but that was down from 42% in last year’s national election. The anti-euro Alternative for Germany party — which is only a year old — won about 7% of the vote. Ms. Merkel called the rise of the Euroskeptics “regrettable.”