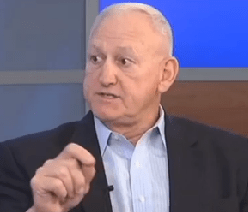 Good old, former Lt. Gen. Jerry “Allah is an idol” Boykin, says we’re at “stage four” of the impending Islamic takeover. I have noticed an uptick in halal carts in NYC!

Yesterday, James Dobson hosted Lt. General Jerry Boykin on his radio program to explain to his audience how the Muslim Brotherhood is currently entering “phase four” of its five-stage plan to take over America.

The interview proved to be so alarming to Dobson and his listeners that they kept Boykin around for another half-hour so that he could continue to enlightening them about the dire threat that this nation is facing.

I cannot even begin to adequately capture the utter terror and paranoia that drove this second episode as Dobson and his co-hosts grew increasingly alarmed as Boykin informed them of American’s impending doom, claiming that the US does not want to try those responsible for 9/11 because we are intimidated by the Muslim world and that they day is fast approaching where his granddaughters will be forced to wear burkas:

Boykin: You know, it’s interesting to me that two of the groups that have not said anything about this – in fact, have kind of been on the other side on this – are the women’s groups and the homosexual groups. Both of those groups are discriminated against very heavily, so if there was total sharia law in this country, by sharia law homosexuals would be killed and all the women would be wearing burkas and hijabs and would be subjugated to the authority of men. But these two groups have no come out and said anything.

Boykin: We are at war. And I think that until Americans are willing to find out was Islam is and to find out the truth about what the Muslim Brotherhood is doing in our country, we’re going to continue to live in darkness.

James Dobson: Are there activist judges that are taking us in that direction?

Boykin: Absolutely, and you know I have a great respect for the Governor of New Jersey, but he just appointed a judge, a Muslim judge, to one of the courts up there in New Jersey who has been known to be associated with operatives from Hamas.

Dobson: This is Christie? Governor Christie?

Boykin: Yes. And this kind of thing reflects, I don’t think an effort on his part of implement sharia law, I think it’s this whole concept of trying to appease the people that, in fact, are our enemies.

Dobson: General, I have wanted to ask this question of somebody for a long time – I’m sure it has a good answer, but I’ve never heard it. 9/11 occurred ten years ago and the people who are responsible for that horrible day of bombing have still not stood trial. Ten years! It’s one thing for them to have been convicted and put in prison for ten years – they haven’t even been brought to trial and I don’t understand why. Can you explain that?

Boykin: We are intimidated.

Let me say I have six grandchildren and three of them are females and I must tell you, I am greatly concerned about the day coming when they will be wearing burkas. That’s how serious I consider this threat.

Dobson: Are you serious?

Boykin: I am very serious.

And the only hope for avoiding this catastrophe, of course, is to vote for the candidates who truly recognize the peril that America is facing.