Tim Donnelly is the Tea Party candidate in the California GOP gubernatorial race and so it’s not surprising that he would cite the vile fear-monger Gaffney.:

California Republican gubernatorial candidate Tim Donnelly’s Facebook post highlights a story by an author who has been called “the anti-Muslim movement’s most paranoid propagandist” and claims Republican Neel Kashkari “supported the United States submitting to the Islamic, Shariah banking code in 2008 when he ran TARP.”

The Washington Times 2008 story posted on Donnelly’s Facebook page is written by conservative Frank J. Gaffney,whom the Southern Poverty Law Center has profiled as a virulent anti-Muslim who “has suggested that President Obama is a practicing Muslim.” 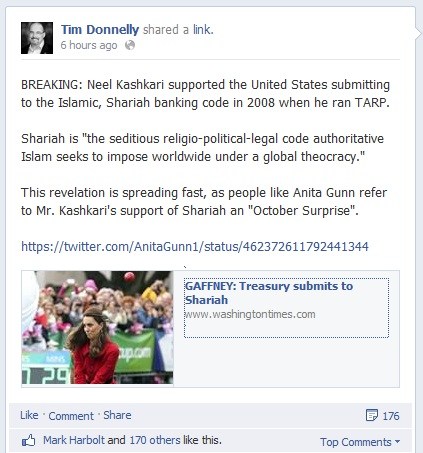 The posting is just the latest evidence of an increasingly nasty campaign between two GOP gubernatorial candidates — Donnelly, the Tea Party darling and assemblyman from San Bernardino County, and Kashkari, the former deputy U.S. Treasury Secretary who administered the Troubled Asset Relief Program under the Bush and Obama administrations.

Kashkari, the son of Indian American immigrants, is Hindu — not Muslim.

From the Gaffney story:

“Thanks to the extraordinary authority conferred on Treasury since September, backed by the $700 billion Troubled Asset Relief Program (TARP), the department is now in a position to impose its embrace of Shariah on the U.S. financial sector. The nationalization of Fannie Mae and Freddie Mac, Treasury’s purchase of – at last count – 17 banks and the ability to provide, or withhold, funds from its new slush-fund can translate into unprecedented coercive power.

Concerns in this regard are only heightened by the prominent role Assistant Treasury Secretary Neel Kashkari will be playing in “Islamic Finance 101.” Mr. Kashkari, the official charged with administering the TARP fund, will provide welcoming remarks to participants. Presumably, in the process, he will convey the enthusiasm about Shariah-Compliant Finance that appears to be the current party line at Treasury.

Donnelly, on his Facebook page, writes: “Shariah is “the seditious religio-political-legal code authoritative Islam seeks to impose worldwide under a global theocracy.” He adds: “This revelation is spreading fast, as people like Anita Gunn refer to Mr. Kashkari’s support of Shariah an ‘October Surprise.’ ”

Aaron McLear, a spokesman and strategist for Kashkari, said the submission by Gaffney on Donnelly’s page, along with what he characterized as the assemblyman’s past “vigilante” remarks about Mexicans, should raise concern among June primary voters about the effects of a Donnelly candidacy on Republicans nationwide.

He said the story cited is wrong. “The U.S. Treasury Department regularly invites delegates from around the world to Washington to advocate for free market principles,” McLear said. “The conference on Islamic finance was designed to explore how free market principles could work in Islamic countries. It had nothing to do with changing America’s legal or financial systems.”