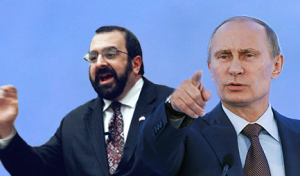 When Russian President Vladimir Putin uses military force to menace Ukraine’s democracy and seize chunks of its territory, when he uses authoritarian laws to crack down on homosexuals and minorities and imprison dissidents, there are those among us, including a record number of elected politicians, who cheer.

A generation ago, Moscow’s fans and enablers would have all been on the far left. Today, with the exception of a marginal group of leftists motivated by anti-Americanism, Mr. Putin’s cheerleaders are all conservatives – some in the United States and Canada, and a record number who have just come to power in Europe.

Last week’s European Parliament elections saw a record number of Putin-admiring and Putin-emulating parties elected to Brussels. Some of these parties are anti-European Union, some are anti-immigrant, some are outright racist and anti-Semitic. They don’t tend to get along with one another, but one thing that unites them is an outspoken admiration for Mr. Putin.

Nigel Farage, the leader of the suddenly powerful United Kingdom Independence Party,used a magazine interview during the campaign to praise the Russian President, calling him the world leader he most admires. “Compared with the kids who run foreign policy in this country, I’ve more respect for him than our lot,” he said at a public event.

In words widely reported in the Russian media, he added that the EU has “blood on its hands” for supporting the democracy movement in Ukraine. Rather than posing a threat to Europe, Mr. Farage said, Russia has fallen prey to Europe’s “activist, militarist and expansionist foreign policy.”

Marine Le Pen, leader of France’s National Front (which sent the lion’s share of French representatives to Brussels) is an even greater admirer. “I think he puts the interests of Russia and the Russian people first, so in this regard, I have the same amount of respect for him as for Ms. Merkel,” Ms. Le Pen said this week, adding that “a lot of things are said about Russia because for years it has been demonized on U.S. orders.” She, like her comrades across Europe, wants to end sanctions against Russia and restore “traditional, friendly” relations.

Geert Wilders, the mop-haired head of the Freedom Party in the Netherlands, has blamed the conflict in eastern Ukraine not on Russia but on “shameless Europhiles with their dreams of empire.” Ukraine’s democracy movement and the pro-European government it elected last week, he said, are run by “National Socialists, Jew-haters and other anti-democrats.” (In fact, extreme-right and anti-Semitic parties attracted about 2 per cent of the vote in the recent Ukrainian election.)

In the minds of such politicians, Europe’s response to Moscow’s incursions hasn’t been slow and mild; it’s been excessive. “We have always been told the European Union stands for peace,” Mr. Wilders said. “Now, we know better – the EU stands for war-mongering.”

These Westerners aren’t backing Mr. Putin out of pure Russophilia. Rather, they admire his embrace of a Christian and mono-ethnic identity for greater Russia, and his aggressive action against what they see as their enemies: European diversity and open borders, and minority groups – especially homosexuals and Muslims. Like them, Mr. Putin embraces the old conspiracy holding that Muslims are secretly plotting to take over Europe, a key plank for these parties.

That’s why North American right-wing anti-immigration activists, generally affiliated with the Republican Party and the right fringe of Canada’s Conservatives, have rushed to back Mr. Putin and the European parties that admire him.

American anti-Muslim activist Robert Spencer made a point of appearing on the Russia Today network (shortly after most of its American staff had quit and denounced it as a Kremlin propaganda outlet) to attack the United States and endorse Mr. Putin’s approach toward Muslim minorities. “Barack Obama is somebody who has been embarrassed on the world stage by Vladimir Putin more than once,” Mr. Spencer said.

And Ezra Levant, the right-wing pundit with Canada’s Sun Media,cheered France’s National Front, Britain’s UKIP and the other Putin-backing parties for their European election victories, praising their embrace of Putinist ideas: “The EU’s de facto abolition of borders … has let millions of migrants move from the poorer parts of the EU to the richer ones,” he explained, warning of “mass Islamic immigration that contains large elements refusing to accept Western, liberal values.”

Their victory is, he said, “a rejection of Obamaism, and a return to common sense, national conservatism. You could say it’s a bit of Stephen Harperism.”

To be fair, Mr. Harper has never endorsed such ideas. It is actually a bit of Vladimir Putinism.