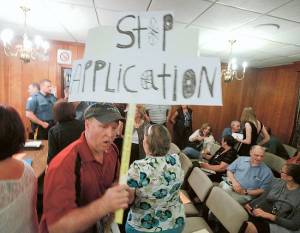 When Bigotry Comes to Your Hometown

Typically, there isn’t a large police presence at a land-use hearing. But Wednesday night’s hearing was different. There was a palpable sense of concern by law enforcement. Why? Because Wednesday night, the board was deciding whether to approve the application of Muslims to convert an old church into a mosque.

The little town of Midland Park is a middle-class suburb of New York City, just north of my hometown of Paramus. It’s home to about 7,000 residents. And now this quiet township had also become the home of an ugly mosque controversy. Unlike the Ground Zero mosque protest of 2010, this fight didn’t make national headlines or become the lead story on the nightly news. Yet to the local residents and the Muslim-Americans who desperately wanted a place of worship, it was just as important, and emotions were just as high.

The small hearing room that accommodated 60 was packed with the faces of brown and white people, while others filled the hallways and adjacent conference rooms. For the next three hours, this hearing would be the big show in this small town. And it didn’t disappoint.

At the outset of the hearing, the attorney for the mosque, sensing that the room was filled with opponents, made a simple plea to the municipal board members: “This is not a public referendum, it’s a question of law.”

He was legally correct, but that didn’t prevent local officials in Bridgewater, New Jersey from improperly preventing the building of a mosque a few years ago. The result was a lawsuit in federal court that found in favor of the mosque, although it’s currently still engulfed in the appeals process.

And then came the parade of people testifying for and against the mosque. The board members would respectfully listen, but showed little signs of which way they would decide.

“I’ve been to nine Bon Jovi concerts…I love this country.”  That was part of the emotional plea of a Muslim-American doctor in support of the mosque. When I was an attorney, I can assure you that I never heard anyone testify at a land-use hearing: “I love this country.” Such a declaration is obviously not required by law, but when you’re Muslim, you feel obligated to continually offer these types of assurances.

We heard from opponents who lived on the block of the proposed mosque. I sincerely believe they were simply concerned about traffic, not Muslims. Others opened by saying “I have nothing against Muslims,” but you could still sense apprehension—not based on malice, but more from a lack of personal exposure to Muslims.

And then something fascinating happened. Since this hearing was taking place during Ramadan, many of the Muslims had been fasting since sunrise. I’m talking 14 hours with no food. As we reached sunset at about 8:45 p.m., I could see some taking out snacks from their bags or passing around figs to break their fast. These people were celebrating their religion while at the same time fighting to exercise it.

Soon, however, the mask of civility was removed, revealing the ugly face of bigotry. As one Muslim man from a neighboring town testified, someone yelled out, “Build the mosque in your town!” Another commented: “I don’t care if they worship their God, just not in our town.” (All the Muslims who testified were from neighboring towns.)

There was a man holding up a sign that read “Stop Application” and “Keep R Kids Safe.” I was a bit confused about the second sign. Was he alleging that Muslims are a threat to children? Not sure, but it wasn’t long until he stormed out of the hearing, declaring: “There are 180 million [not billion?] radicalized Muslims!” [Yes, he was using the Islamaphobe’s BS line that not all Muslims are bad, but X percent are.]

The hearing soon reached a boiling point as a woman calmly, but intensely, testified from prepared notes about the alleged threats Islam posed to the people of the town. Parroting the crap we have heard from Islamophbes on Fox News, she claimed Muslims are “trained” to lie and that they don’t share the same values as we, Americans, do. When someone in the crowd objected, another in the audience said: “It’s the truth, you don’t know them.”

There was even a moment of surreal levity. Another woman sitting in the audience, and again this is small room where everyone could easily see one another, had been loudly voicing anti-Muslim comments. She then came up to testify, stating: “I don’t have any problems with Muslims, it’s about traffic.” Did she really think we couldn’t see she was the same person saying anti-Muslim crap minutes before?!

Don’t get me wrong, there were some bright spots, such as when a Jewish and a Christian leader testified in support of the Muslims’ freedom to worship like people of other faiths. However, every single resident of Midland Park who testified voiced opposition to the mosque. (I wonder how freaked out these mosque opponents, who were all white, will be when they realize that by 2045 they will be outnumbered by people of color?)

And now, after three hours of talking traffic, tax bases, and Muslims, it was time for the board to decide. If they followed the views of the local residents, the mosque would be soundly defeated.

The decision was unanimous. A new place of worship was coming to this small town. And it would bring with it people that don’t look or pray like most of the local residents.

But now comes the more challenging part for the Muslim community. It’s one thing to win a hearing, but it’s quite another to win “hearts and minds.” I did leave, though, with a sense of optimism after seeing the leader of the mosque walk up to as many of the opponents and as he could find and extend his hand. True, it’s a small step, but it’s a really good one to start with.