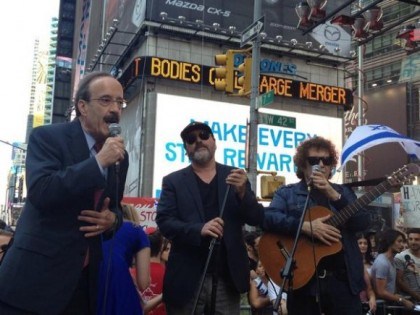 Anti-Muslim activist Pamela Geller was a speaker (see the video above) at a pro-Israel rally in New York City Sunday that also featured Eliot Engel, a New York Democrat. Engel’s presence at a rally that invited Geller, a blogger and activist whose bread and butter is casting aspersions on Muslims, raised eyebrows on Twitter and elsewhere.

Engel is a liberal Congressional Democrat, though he is a hawk on foreign policy issues. Geller is a far-right anti-Muslim blogger whose organization Stop Islamization of America was labeled a “hate group” by the Southern Poverty Law Center. Geller has called President Barack Obama “a muhammadan” and floated theories that Obama is the child of Malcolm X and was involved with a “crack whore.” And she is allied with Tea Party groups.

But those stark political differences melt away when it comes to showing up to support Israel’s assault on Gaza. Engel’s and Geller’s speeches were delivered to a rally featuring hundreds of people chanting things like “Israel wants peace, Hamas wants war” and “We are the Jews and we are not afraid.” The show of support for the Israeli assault on Gaza, which has killed at least 375 Palestinians, the vast majority of them civilians, was reportedly organized by local New York Jews.

Here’s more footage of the rally from VIN News:

“I urge you to stand with Israel today,” Geller said at the rally. “But if you don’t, the devil will be at your doorstep tomorrow. Am Yisrael Chai!”

Geller is a staunch advocate for Israel, and has repeatedly created controversies by buying ad space in cities and putting up inflammatory anti-Muslim messages on them. One ad she has put up in New York and elsewhere reads: “In any war between the civilized man and the savage, support the civilized man.” Below those words and in between two Stars of David, the advertisement read: “Support Israel. Defeat Jihad.” She repeated that message at the rally.

Engel’s ardent support for Israel has lead him to appear alongside right-wing figures in other venues. In 2008, Engel came under criticism from progressives for speaking at the Christians United for Israel conference.