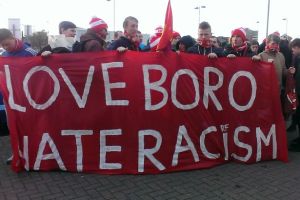 Boro have banned three fans for life for their part in a Koran ripping incident at an away match.

Six supporters were originally given temporary bans from The Riverside after the 2-2 draw at Birmingham City in December. West Midlands Police investigated claims pages of the Islamic text had been thrown in the air and three fans were later charged.

The club was unable to confirm which supporters it has banned for life.

A spokesman told The Gazette: “Middlesbrough Football Club has banned three fans for life following an incident at Birmingham City’s St Andrew’s Stadium on December 7 2013 in which a copy of the Koran was ripped up. Another two supporters have been banned for 12 months and a sixth fan remains suspended while he remains out of the country.”

Julie Phillips, 50, and Gemma Parkin, 18, from Middlesbrough, were found guilty of committing a religiously aggravated public order offence by magistrates in May. Phillips, of Kenmore Road, Netherfields, and Parkin, of Kimberley Drive, Pallister Park, were both fined and ordered to pay costs. Boro season ticket holder Mark Stephenson, of Napoleon Drive, Shrewsbury, pleaded guilty to causing racial or religiously aggravated harassment, alarm or distress and was fined £235.

The three were not issued with football banning orders by the court which would have prevented them from entering any ground in the country, but Boro have now taken their own action after reviewing evidence provided by Birmingham City.

Phillips, a Middlesbrough Council employee, told the court she only found out the book was the Koran when she was questioned by police after stewards saw what was happening. “I was mortified,” she said. “Very ashamed and disgusted in myself. It was just a book of some sort, I can’t remember if the cover was on. It was just white paper.”

Parkin said she took the Koran into St Andrew’s after she was handed it at Birmingham’s Frankfurt Christmas Market. She claimed not to have looked at the book, saying she had no idea it was the Koran. She said Stephenson, a purchasing manager, took the book from her bag before it was “turned into confetti”. “Everyone else was ripping it up so I just ripped it,” Parkin told the court.

A Birmingham steward told the court he heard chants about Muslims and the Koran as the book was passed around and ripped up. He later followed Phillips and Parkin and pointed them out to police officers after the match ended.

During his court case, Stephenson said he was “shocked and appalled” by his actions.

Boro are next due to visit St Andrew’s on February 14.