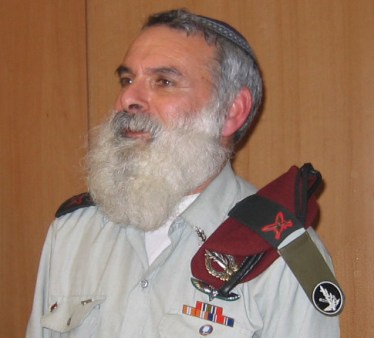 Prominent settler and former Israeli army chief rabbi Avichai Rontzki delivered a “messianic, fiery speech” to Israeli forces prior to the devastating massacre of the Gaza City neighborhood of Shujaiya, it was revealed today.

An account of the speech appears in a new piece by Nahum Barnea, a prominent journalist at Israeli newspaper Yedioth Ahronoth, and is based on remarks made by a soldier present at the time.

The soldier related that before their invasion of Shujaiya, troops were gathered to “listen to the words” of Rontzki, who “praised the miracle of God’s army.” According to an article last week in Kipa, a religious-Zionist oriented news site, Rontzki has been performing reserve duty and “encouraging the combatants on the ground.”

The Electronic Intifada has already reported on the phenomenon of groups of Jewish mystics offering support to the Israeli forces currently shelling Gaza, as well as the Israeli army commander who declared “holy war” on Palestinians.

The anonymous soldier in Barnea’s article also recounts a similar event prior to the Shujaiya massacre:

We got close to Kibbutz Nahal Oz and then they gathered us together. You know how it is in the army – when told to gather, you gather. Waiting for us was a bunch of Breslev Hasidic Jews singing “Messiah, Messiah,” dancing and bouncing around. We formed a circle around them, and a bunch of fighters danced with them in ecstasy

Israel’s ground assault on the Gaza Strip began late on Thursday 17 July, with tanks receiving orders “to open fire at anything that moved.”  Over the next few days, the Shujaiya district of Gaza City was subjected to intense and indiscriminate bombardment, including 600 shells fired by an artillery battalion and 100 one-ton bombs dropped from the air.

Rontzki’s speech to Israeli soldiers recalls his time as Israeli army chief rabbi, when, in 2009, he told religious students that troops who “show mercy” towards the enemy in wartime will be “damned.” During Israel’s so-called “Operation Cast Lead” massacre in 2008-09, the army rabbinate under his leadership distributed inflammatory publications that referred to the massacre as “a war on murderers.”

Rontzki was one of the founding members of Itamar, a fanatical Israeli settlement colony near Nablus, where has also led a yeshiva, or religious seminary.