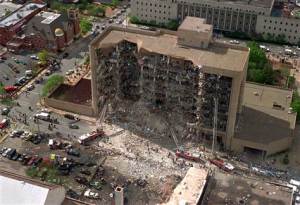 Jenks Freshman Academy, an Oklahoma school, has shown students in history class a “History Channel” film titled “Conspiracy: Oklahoma City Bombing.” Adam Soltani, director of CAIR-Oklahoma, was tipped off to the showing by a concerned parent.

Soltani viewed the “documentary” which largely blames Muslims for the 1995 bombing perpetrated by Timothy McVeigh and Terry Nichols, Soltani writes,

Unfortunately, the film that is an approved selection in Jenks schools’ media library was little more than a hate-filled video that goes to extreme lengths to drag the blame for one of the most tragic events in Oklahoma history onto Islam and Muslims.

The video in question is currently being reviewed by Jenks’ school officials, however, by not immediately pulling the video from their shelves, the school administration is missing the point.

There is no question that this video should be pulled from the shelves. What kind of school in its right mind would air shows from the “History Channel?” The History Channel is well-known to be light on actual history and heavy on hearsay, UFO abductions, Bible codes and all around goofy/faulty history-telling.

The idea that Muslims were the real masterminds behind the Oklahoma City Bombing mirrors what disgraced journalist turned “terror expert” Steven Emerson claimed at the time, when he infamously stated that it had “a Middle Eastern trait.” Since then conspiracies claiming Iraqi secret agents covertly sent by Saddam Hussein used the easily duped, poor little McVeigh and Nichols for the attack have infested Far-Right Tea Party sites, such as Accuracy in Media and the ironically named American Thinker.

In the recent past we have seen concerted campaigns by right-wing, Islamophobic organizations such as ACT! For America, The Eagle Forum and Charles Jacobs’s Americans for Peace and Tolerance attempt to challenge, expunge and or edit-in their prejudiced views of Islam and Muslims into history and social studies texts.

The case in Oklahoma, while not directly related to those campaigns, highlights what may be a serious problem and requires further investigation. What exactly are schools teaching their children about Islam and Muslims? How many are teaching them, as in this instance, that Muslims are nefarious evil-doers who are behind all acts of terrorism?

Hopefully this glaring issue is resolved quickly and children can learn real, solid history and not be indoctrinated by just another sensationalist History Channel documentary that doesn’t deserve the dignity of being watched in a school classroom.

One last note is that there is an actual conspiracy revolving around the Oklahoma City Bombings that has recently been in the news and it has to do with the possible cover-up of evidence by the FBI, leading some to believe others were involved,

A Salt Lake City attorney is arguing in a lawsuit that the FBI has video of the Oklahoma City bombing that shows a second person was involved.

The case is at the heart of Jesse Trentadue’s quest to explain his brother’s mysterious jail cell death 19 years ago, which has rekindled long-dormant questions about whether others were involved in the deadly 1995 blast.

What some consider a far-flung conspiracy theory is at the forefront of his Freedom of Information Act lawsuit against the FBI that goes to trial Monday.

Trentadue says the agency won’t release security camera videos that show a second person was with Timothy McVeigh when he parked a truck outside the Oklahoma City federal building and detonated a bomb, killing 168 people. The government claims McVeigh was alone.

Unsatisfied by the FBI’s previous explanations, U.S. District Judge Clark Waddoups has ordered the agency to explain why it can’t find videos from the bombing that are mentioned in evidence logs, citing the public importance of the tapes.

Somewhat callously, the FBI has responded by saying it would be “burdensome” to search for the video,

The FBI says it can’t find anything to suggest the videos exist, and says it would be “unreasonably burdensome” to do a search that would take a single staff person more than 18 months to conduct.

This all sounds suspicious and raises many questions but the conspiracy about Iraqi involvement is a concoction from the fevered imagination of the right that has no relationship to these facts.