Recently, Twitter was abuzz with its latest agent provocateur tweeting in support of the orcs of our time, ISIS. 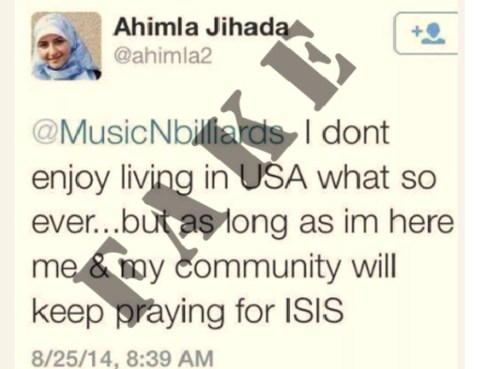 I’ve emblazoned the image with the word “Fake” in order to avoid spreading this nonsense uwittingly.

The tweets of this person declaring her undying devotion and love for ISIS from right here within the borders of the United States garnered some pretty ludicrous responses. After all, ignorance only begets ignorance. 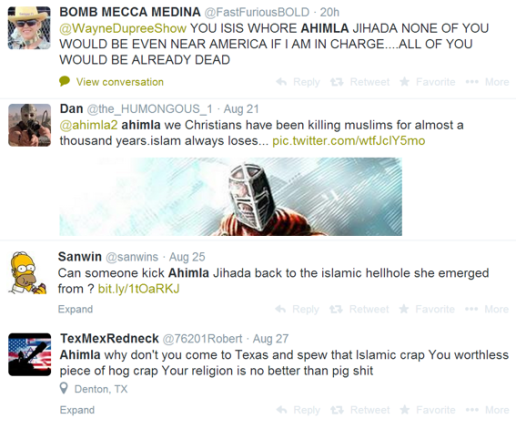 On the blogosphere it was much worse. There were serious efforts to locate her and murder her: 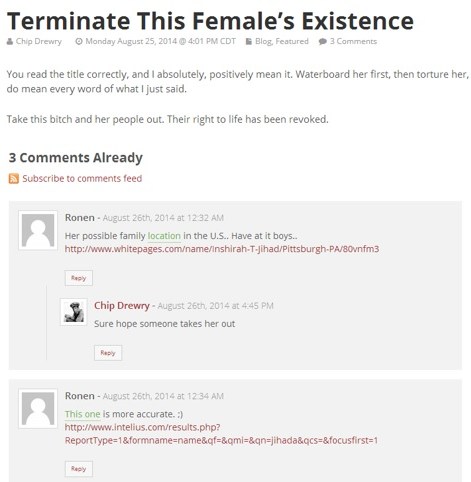 In this crazed flurry of suggestions to bomb Mecca and Medina, to kill Muslims, and to even go as far as attempting to find and kill this girl, these folks overlooked a glaring detail that I was able to discern in 5 minutes. “Ahimla Jihada” is fake. Twitter apparently discovered this early on and any attempt to access the Twitter account @ahimla2 will reach this page:

So who is she? First and foremost, the name “Ahimla” doesn’t exist in any language on earth. Google it. All you will get are nutters plotting to kill this phantom or results thinking you misspelled the Indian city “Shimla”.

You won’t find a single person on earth named “Ahimla”. People have all kinds of crazy names. Frank Zappa named his kids Dweezil, Moon Unit, and even —as awesome as it is— Rodan. Ving Rhames named his kid Reignbeau. Yes. Pronounced “Rainbow”. David Duchovny named his kid…well…Kyd. But the twit behind this fake Twitter account had to use the one name that just didn’t exist on planet earth. Finally, the last name “Jihada”? That really took a lot of thought.

As for the picture, herein is something very sad and a lesson in sleuthing fabricated propaganda on the internet. Bookmark the URL https://www.tineye.com/ right now. Using this website you can upload any image and it will search the internet for every instance of the image and even similar images going back for years.

I always use this site whenever I get images over social media allegedly portraying atrocities committed in some crisis point of the world. A majority of the time those pictures end up being lifted from something completely unrelated to what they are purported to represent. Don’t get duped! I hope everyone will start using this site to verify the authenticity of images that make claims with an objective of manipulating public opinion.

In this case I was able to find the source of this poor girl’s image. It was taken on April 1, 2009, five years ago, by a photographer who thought this girl’s infectiously cute smile would make a great picture. It was lifted from his Flickr account. Here’s the link to the original post:

Note, that he titled the picture “Angel Face”. How both ironic and tragic is it that this young girl’s angelic face was used to represent such great evil by someone who can be described as no less than a diabolical liar. Not only is this innocent girl’s life in danger but there are clearly people ready to exact violence upon any girl who even looks like her. That would be any Muslim woman who wears a scarf.

In the end, there are two critical details to be gleaned from this:

First, in the absence of any American-Muslims supporting such terrorist organizations they found the need to fabricate such a person. American-Muslims deserve a pat on the back for this. We have all kinds of crazies just like anyone else, but we should be proud that these incognito Islamophobes couldn’t find a real extremist to retweet. They had to fabricate one.

Second, it should make everyone painfully aware of what we’re up against. There are dubious forces from an increasingly belligerent political Right who are out to brainwash, by hook or crook, the American public into hating their fellow citizens of the Muslim faith and to justify a foreign policy in the “10/40 Window” that has tarnished America’s reputation globally and needlessly puts our men and women in uniform in harm’s way. It’s high time we fight misinformation with information.